From the Editor: Uncommon Good 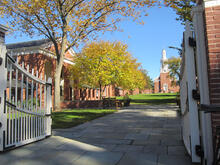 The first time I interviewed YDS professor Jennifer Herdt more than a decade ago, when she joined the faculty, she spoke about the indestructible human urge to seek happiness, despite the odds, in the common good. She worried that society’s ethical language was thinning, defaulting to one-dimensional labels that demonized others and eroded trust. She argued that church teachings—the sacred narratives, liturgical practices, art, and music—could be a contemporary source of ethical formation in personal character and in public life. Self-oriented materialism, she thought, was not enough.

“We flourish together or not at all,” said Herdt, the Gilbert L. Stark Professor of Christian Ethics.

I found these ideas stirring, truthful, and also kind of a shock. It struck me as rare to hear notions of civic virtue aired in public discourse at all. In the mediascape we get meticulous updates about the mischievous attainments of billionaires (always “self-made”). We hear from the latest visionaries of a libertarian future. We can sense the pace of the culture accelerating, a fragmentation of social bonds. In such a climate a phrase like “the common good” can sound musty, plodding, out of step. The case for citizenship itself—the duties we owe each other—is no longer so self-evident. That word “duties” is a non-starter for many in exhausted times. Herdt’s words illuminate the conversation like a defiant blaze. Her view is that people are secretly eager to contribute to social betterment and transcend the politics of bitterness.

Politics is an insecure vessel—it can’t hold the deepest desires of human purpose. The future of theological education resides in themes that theology and ethics and other divinity disciplines have always lived by: What does it mean to be human? What is the good life? What is the good society? How do we learn maturity and self-restraint?

Without asking for much credit, theological schools have been pillars of public-minded thought and action since the earliest days of the American republic. Graduates of theological education have long pursued public-spirited works as a counterweight to unrestrained market forces. They are a presence against the “metaphysical disquiet” inherent in a secular democracy, as writer E.L. Doctorow has described this country, a nation “written down on paper, a country in a covenant not with God but with itself.”[1]

In its bicentennial year, YDS has had occasion to visit past accomplishments and commitments, including its long-term central focus: training people for public service. This was a mark of YDS from the start. The School’s first faculty hire set the tone: theologian Nathaniel Taylor created space within New England Calvinism for a more flexible and relatable version of Christian faith for new generations. In those first decades after 1822, Taylor’s “New Haven Theology” liberated many YDS students to pursue daring ministries, start new colleges and churches in the pioneer West, and become abolitionists who influenced regional debates before the Civil War.

YDS outgrew its Calvinist roots more than a century ago, but the place remains remarkably steady in its mission: Christian-oriented, ecumenical, responsive to contemporary social conditions and crises, still sending out ministers, scholars, and cadres of theologically minded practitioners in fields beyond church or academy.

Today’s graduates enter a world beset with trends that threaten the trajectory of such an education—the decline of religious authority, the debt-inducing cost of a degree, among others. Fierce political identities have eclipsed religious bearings for millions, publicly twisting the faith into something furious and unrecognizable. But politics is an insecure vessel—it can’t hold the soul’s greatest dreams or the deepest desires of human purpose. The future of theological education resides in themes that theology and ethics and other divinity disciplines have always activated: What does it mean to be human? What is the good life? What is the good society? How do we learn maturity, self-restraint, perspective?

“The future needs more theological education, not less,” Daniel Aleshire, former director of the Association of Theological Schools, writes in a recent book.[2] But such education, he argues, needs to take a stronger turn toward the theme of moral formation—producing Christian leaders whose authority stands not only on professional credentials but crucially on their integrity and maturity as persons of faith. Contemporary culture needs the latter as much as the former.

In a counterpart book, theologian Keri Day ’04 M.A.R. also advocates for deeper moral formation, calling for theological schools to confront their own habits of structural racism—and take the risk of moving into the unknown, catching a new spirit of truth-telling, vulnerability, and belonging in a rapidly shifting era.

“I want our theological institutions not to settle for institutional preservation but courageously to lead communities into futures of love, care, and justice,” she writes.[3]

The stakes are high. Theological schools aim to awaken religious imagination and provide tough-minded preparation—often drawing on an anthropology of human limits and potential—when few other institutions have the spiritual rootedness to withstand onslaughts of post-fact partisanship or utopianism. In 2021, I interviewed Jennifer Herdt again, this time for Reflections. Once more she said something kind of shocking, given how few public voices dare to venture such a statement. But theological schools do.

“We are to pray for our enemies,” she said.[4] “The power of this command is that it opens us up to see our enemies as God sees them, to love them as God’s beloved children, rebellious and imperfect as we ourselves are.”

Ray Waddle, Reflections editor since 2007, is the author of a new history of YDS called “This Grand Errand”: A Bicentennial History of Yale Divinity School, published by the School and distributed by Yale University Press.

[4] “We Have to Move Beyond Zero-sum Games: An Interview with Jennifer Herdt,” Reflections, Spring 2021. 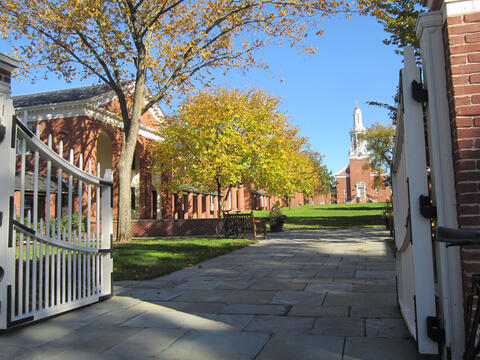