The Spirit of Ubuntu: An Interview with Allan Boesak 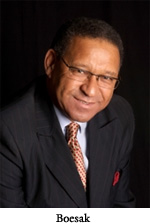 Allan Boesak – minister, theologian, former politician – is a patriarch of the modern anti-apartheid movement in South Africa. He emerged as a public force thirty years ago as the most visible leader of the United Democratic Front, the largest anti-apartheid movement in South Africa’s history. During that tumultuous decade, he also became the leader of the World Alliance of Reformed Churches.

Boesak received a Ph.D. in theology from the Protestant Theological University in Kampen, the Netherlands, and is the author of seventeen books. His most recent is Radical Reconciliation: Beyond Political Pietism and Christian Quietism (Orbis, 2012), written with Curtiss Paul DeYoung. Boesak is currently an honorary research fellow at the University of KwaZulu- Natal in South Africa. Last fall he was visiting theologian at Butler University and Christian Theological Seminary, both in Indianapolis. He spoke with Reflections in February during his visit to Yale Divinity School, where he lectured on “Reconciliation, Justice and the Spirit of Ubuntu.”

REFLECTIONS: Why is the subject of race so hard to get right and so easy to distort and evade?

ALLAN BOESAK: It’s a difficult conversation partly because so many people are unable to see that it’s not just a matter of improving interpersonal relationships. It also involves addressing some real and difficult systemic problems – structures of injustice and privilege. If you don’t see that, then there is little you will do to rectify racial inequality. You’ll think all you can do is individualize it – improve relations between oneself and others of a different race – and deny the rest exists.

What’s hard to see is that the challenge of the personal dimension is too indebted in the systemic to ignore. It affects friendships. To use the South Africa situation, it is important to realize in our discourse with each other as friends that long before we met, the relationship itself has already been determined by structural realities – by white power and privilege that are so embedded in the system that they become normalized. We have to realize that we come into our conversation with this reality, and unless we grapple with it honestly, we’ll find that the friendship that might have developed does not, or if it does develop it is too shallow to be real, because we keep running away from those things we find are too hard to talk about.

REFLECTIONS: In the U.S. there is often a sense of weariness or impatience around race, as if we have tried and tried but tensions remain.

BOESAK: Those who are fatigued by it are, I think, unwilling really to grapple with it. In South Africa as well as the U.S., we are no longer a racist society – that is, there are no more laws on the books or signs saying you can go here and I must go there. But we are both thoroughly racialized societies: Race has much more to do with what’s going on in our minds and the ways power structures work. How hard have we really worked to eradicate those forces that cement racialist power? We must answer that, because those are the things that prevent us from building the social cohesion we need.

REFLECTIONS: You’ve said the goal in South Africa is to build a non-racial society. Here, we embrace a multi-ethnic model. Is that a mistake?

BOESAK: I thought South Africa was race-obsessed, but I think the U.S. is more so – more into ethnicity and ethnic differences, and that makes the conversation harder. We think multiracialism is a bit of a copout. We think people have to come to an understanding that says not so much that “race doesn’t matter” but asks why did we get caught up in race at all? Realize how irrelevant and even accidental it is. Ask how could something so irrelevant come to determine my life and relationships and the way my society is structured.

REFLECTIONS: The Obama election inspired some to declare that we live now in a post-racial society.

BOESAK: I think “post-racial” is a dangerous trap. You can fall into complacency and give your complicity a much more dangerous character. The election of President Obama was an amazing thing. The rest of the world saw it like that and we embraced it. What we cannot embrace is the use of this extraordinary event to suppress crucial issues that with him should have been aired with much more confidence. You have elected an African-American president who does not talk about race himself because he is afraid that it might land him in hot water. It’s always a sign that something is very wrong: A black person with power in a white-controlled society is afraid to raise even the question of race. He feels he must be very cautious.

The question ought to be: How do we use this moment to create momentum? I don’t see the Obama election and re-election as closing the doors on the racist past. I see him flinging the doors open to a future that people can move into together. I don’t mean an artificial togetherness. We have not defeated the structures that allow perhaps one person to rise but millions to languish in the old racist ways. Flinging the doors open seems to me a better metaphor for understanding Obama’s rise and seeing opportunity for community to be built.

REFLECTIONS: In your country you’ve talked about the importance of Ubuntu, the idea of human interconnection, affirmation, openness to others. Can that be a practical guide for reform?

BOESAK: When the aim of society is to be non-racial, then the question of race is subsumed under the question of our common humanity. We’ve had help with our thinking from the concept of Ubuntu. The concept has been abused, sentimentalized, and romanticized by many and almost disempowered. But in essence, if I really believe that my humanity suffers when your humanity is undermined, and I cannot be fully myself unless I make sure you can be fully yourself, and the recognition of your humanity actually enhances my own – so that I embrace you, embrace the other, and therefore the otherness of the other person doesn’t matter and has no impact on me – then Ubuntu is a wonderful, powerful concept. It says the humanity of the other is what binds us together. Now, too often we claim Ubuntu without really meaning it. I ask that we not underestimate its immense value or trivialize what is unique about it. Ubuntu allows us to move away from the power of ethnicity that was part of racist apartheid thinking.

BOESAK: Ubuntu is not a biblical concept but an ancient African one. Nevertheless it falls back on one simple thing: that humans have been created for togetherness, and what drives us apart is greed, lust for power, and a sense of exclusion, but those are aberrations. What always strikes me in the story of Cain and Abel is how often the word “brother” is used. Cain killed his “brother.” God says it was “the blood of your brother.” The killing was done to another human being, a child of God like you, breaking that sacred bond of common humanity. Ubuntu understands that, and that seems to me also a biblical idea. Then Jesus comes and reaffirms our humanity by taking it upon himself and identifying moreover with the poorest of the poor, the set aside, the least of these. These are the ones who exemplify my humanity in the world.

REFLECTIONS: Is this a biblical message you customarily hear in churches?

BOESAK: If your starting point for understanding humanity is a racialist viewpoint, with superiority and inferiority projected onto people because of the color of their skin, then it’s so easy to take the next step of justifying that point theologically and reading it into the Christian scripture. And that makes it harder to understand what scripture is actually saying! I happen to believe in the old Reformed adage that scripture explains itself. I believe scripture is not just resilient but rebellious against its abuse by people. Scripture says it refuses to be used in that way for long. That is why the gospel that has been used by the oppressors is the same gospel that liberated the oppressed: They were reading the same book. Something in the DNA of Christian faith and in the Bible agitates against that kind of misuse.

BOESAK: If we read the New Testament honestly, Jesus emerges as the figure who radically changes lives. I think most of us in the churches really do need a conversion experience, a move away from the sentimental and comfortable ways we have reduced Jesus. Some will be upset, but it takes prophetic preaching. Jesus makes demands on us.

The fundamentalists may have created a personalized Jesus we don’t even recognize, but the liberals’ Jesus, too, is an individualized Jesus who serves the empire – a Jesus painfully divorced from his ministry of justice. It seems liberals tend to ignore him or doubt the historical context or just take him as a teacher who had little sayings he gave to small groups of people but without impact on wider society. The books I read that take Jesus seriously in his historical circumstances are by progressive theologians who embrace his message of liberation and then take stands against structures of injustice.

REFLECTIONS: What has your political experience taught you? Do churches have an untapped moral power to contribute?

BOESAK: If there’s one place where we ought to start talking about social change, it’s the churches. How in the world can you preach the gospel without teaching about justice, equality, our common humanity? We need to start those conversations and realize they’ll be difficult ones. But we have resources, much more than people in city hall have: We are not supposed to give our higher loyalties to the things on earth that divide us. We have far too much unity in what we say we believe, if we would begin to be serious about it. Then we could challenge politicians and say we as a community believe these unjust structures lead us to places we really don’t want to go to anymore.

Now, politicians are not willing to have such a conversation. I’ve been a politician and so I’m sometimes cynical about what politicians won’t do. When I hear a politician say something that makes no sense whatsoever, I think there’s one of two things there: There’s money or the promise of money.

But our society is not just politics. Our society is us. How is it possible that we talk with such conviction about the right to own instruments of murder and death and not have the same enthusiasm for the right of people to have shelter, the right of the vulnerable to be taken care of? We have the freedom to redefine power as a force based on servanthood and not just domination. Ordinary people – churches, too – have a role to force politicians to respond. Governments are not impressed with theories, but governments are impressed with people who change their minds about things.