We Can Be Silent No Longer: Michelle Alexander 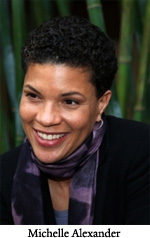 In her book, The New Jim Crow: Mass Incarceration in the Age of Colorblindness, Michelle Alexander argues that a spurious War on Drugs targets black men, profits a prisonindustrial complex, and underwrites a new national form of racial control. She writes: “Today it is perfectly legal to discriminate against criminals in nearly all the ways that it was once legal to discriminate against African Americans. Once you’ve labeled a felon, the old forms of discrimination – employment discrimination, housing discrimination, denial of the right to vote, denial of educational opportunity, denial of food stamps and other public benefits, and exclusion from jury service – are suddenly legal. … We have not ended racial caste in America; we have merely redesigned it.”

Alexander, a law professor at Ohio State, lectured at YDS in February. Before her talk, she held a questionanswer session attended by hundreds of students. Here are excerpts from her remarks:

I think there has been a tendency to sit back and wait for racial justice to trickle down once Barack Obama was elected. Ironically, black communities in particular have been demobilized in the era of Obama and are less likely to make demands on a range of issues from jobs to criminal justice reform. I think Obama’s heart is in the right place. But whether he has the courage of his convictions in a political environment in which it does not pay to be candid about issues of racial justice is another matter.

It’s foolish for us to imagine that Barack Obama just because he’s black is going to respond dramatically differently to these political realities than the presidents who came before him. It’s going to be hard for him to be a bold truth-teller on these issues, but it’s difficult to point to a single president we’ve ever had who was bold and courageous on racial justice without being made to be.

I’m hopeful that in his second term he’ll be the president that I’d guess he probably wants to be – but it’s our job to make the pathway for that to happen.

I see hope particularly in the emerging grassroots movement of formerly incarcerated people, who are finding their voice for the basic restoration of their civil and human rights. One of the most damaging dimensions of mass incarceration is what it does to the psyches of those trapped in it. There’s so much shame heaped upon people who’ve been labeled criminals and felons, and it’s so destructive for families. Many people who’ve been branded as criminals and felons haven’t, until now, even felt enough sense of self-worth to say, “I deserve to be treated better, I deserve the right to be able to work, support my family, educate myself, and be able to vote. I am someone who matters. I am a human being.”

I’m encouraged by growing numbers of young people who are starting to protest against mass incarceration – who are beginning to connect the dots between the defunding of education and the rise of the prison-industrial complex, also a growing awareness of the relationship of the immigrant rights movement and the movement against mass incarceration.

I view mass incarceration as a profound human rights crisis that won’t be solved simply by appeals to the same kinds of civil rights ideals that animated that movement. Unless and until we as a society begin to believe that every human being matters – no matter who you are or what you’ve done, you are truly worthy of the right to work, quality education, shelter – then I don’t see how we will ever undo the traps of these caste-like systems that repeatedly emerge or dismantle the caste system that surrounds mass incarceration today. People who’ve been branded criminals can be denied the right to work, turned away from housing, denied even access to food.

Because the Constitution doesn’t include “human rights” in it, and because the U.S. isn’t particularly warm and friendly towards the U.N. declaration of human rights, I think it’s more worthwhile to shift the way people think about economic justice, racial justice, social justice – shift into a human rights framework. That represents the same set of values that Dr. King and other racial justice advocates viewed as absolutely essential to the liberation of the African-American community at the peak of the civil rights movement. But we’ve largely abandoned those values, pursuing a much narrower path of litigating civil rights in courtrooms and trying to do battle for those narrower rights in a political arena where poor people inevitably have no voice.

From a personal faith perspective, what I’m most hopeful about is that faith communities are waking up. There’s the Samuel DeWitt Proctor Conference, a large network of progressive black churches that has made mass incarceration one of its major issues. There’s the United Methodist Church, which is divesting from private prisons.

I think faith communities are beginning to ask themselves out loud the question, “How could we people of faith and conscience possibly have been silent for so long as millions of people are rounded up, locked in cages and denied the very forms of compassion, forgiveness, and redemption we say we’re all about?”