From the Editor: The Antibodies of Christ

Last year, during the exchange of the peace at church, I turned to the people behind me as usual.

“Peace be with you,” I said to a tall nervous guy.

I was expecting a ritual connection, not a confrontation with the global cash nexus. He saw my hesitation.

“I’ll pay you back next week,” he said, as if to sweeten the deal.

Minutes before, we had recited the creed, confessed our sins, accepted forgiveness from the Most High, and now, awash in gospel compassion, I offered this stranger … my annoyance. Was he really in need? How to help him? The liturgy rumbled on, leaving us standing there. But I had a $5 bill and handed it to him. He left.

True, I gave him the $5 he asked for. It’s also true that I did not hand over the $20 bill that was also peeking out of my wallet. Twenty dollars seemed like “too much” to give away.

There’s a modern assertion heard all the time now: I work hard for what I earn. This is the music of meritocracy. It suggests individual success owes nothing to anyone else, owes nothing to luck or family connection or advantageous tax policy. It implies unnamed others aren’t working so hard for the money. But what about people making less than minimum, or parents holding down two jobs and a side hustle, or underemployed people fending off bad luck, racism, sexism, illness – aren’t they especially working hard?

Well, that was last year. The virus pandemic is upending our reverence for that arrangement, stripping bare the old frivolities, inflicting pain in every economic corner, most existentially on the least of these. Perhaps it will rewrite some rules or create new, better stories to live by. Social distancing is the word right now, jostling with fear and uncertainty, but new roadmaps of compassion will eventually be drawn. The DNA of Christian faith – belief in a God who walked among the sick – will help articulate renewal, both spiritual and economic.

A grim economic connectedness between rich and poor is never discussed. Writer-actor Wallace Shawn once wrote a play, The Fever, about it: The rich stay rich when the poor stay poor. In one scene he ponders the mundane price of a winter jacket:

“What is it that determines the price of a coat? The coat’s price comes from its history, the history of all the people who were involved in making it and selling it and all the particular relationships they had. And if we buy the coat, we, too, form relationships with all of those people, and yet we hide those relationships from our own awareness by pretending we live in a world where coats have no history but just fall down from heaven with prices marked inside. ‘I like this coat,’ we say, ‘it’s not expensive,’ as if that were a fact about the coat and not the end of a story about all the people who made it and sold it.”1

What does commodity pricing have to do with religious faith? Nothing. Everything.

We can envision future sacred spaces opening up – and hearts opening up – to liturgies that speak the facts of desperate neighborhood suffering, homilies that chart policy paths to a living wage or question why CEO salaries ballooned to 400-1 to worker wages. (In the 1960s, the ratio was closer to 20-1.) Meditations could focus on the damage done by three interlocking trends of the past 40 years – deregulation expansion, intensified inequality, and climate crisis denial. French writer Bruno Latour connects them: Explosive inequality has shattered our belief in a common horizon where all might prosper.2 Our faith has held this knowledge inside its bones for generations – that we live in a common world made by the Creator, and it is grievous to injure it and poison it. Today we’re getting clarity about the fragile financial world we’ve created and the durable courage there is to find in every gospel story.

Shamefully, I now realize I was annoyed by that guy in church because he broke up the zone of calm I want from worship. I had not taken to heart the communion prayer we also recited that day, “Deliver us from the presumption of coming to this table for solace only, and not for strength; for pardon only, and not for renewal.” I never saw him again. Not yet anyway. The task continues, the work of turning to meet the next stranger, the effort to repair this commonly shared world, in sickness and in health.

2. Bruno Latour, Down to Earth: Politics in the New Climatic Regime (Polity Press, 2018). 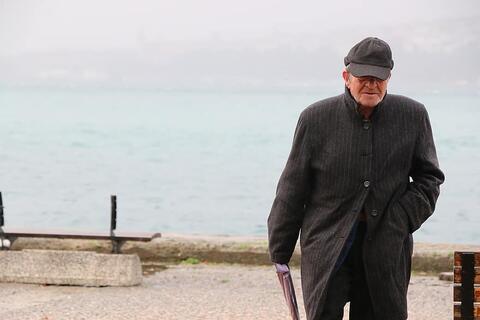