Getting Political in the Pulpit about Poverty 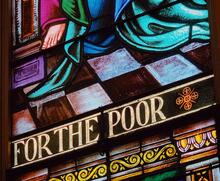 In my second year at YDS, I took a class called “Jesus and Paul on Poverty.” For that course I read The New Jim Crow by Michelle Alexander (New Press, 2012). The book changed my life.

Until that time, I had no real understanding of the criminal justice system in America and certainly did not think very deeply about the link between incarceration and poverty. Much has changed since then. My views on incarceration, poverty, and the people affected by both have taken a turn toward Jesus, whose ministry said much about the poor and our obligations toward those in our society who suffer the most.

I remember being asked, as a first-year divinity student, what I thought about liberation theology. At the time, I didn’t know too much about it, but that did not stop me from answering that the only kind of theology I find in scripture is liberation theology. That the Bible from start to finish speaks to a preferential option for the poor seemed obvious to me, even before finishing my first class in biblical studies. Nothing that I have subsequently learned has changed my mind.

Since graduation and ordination, I have pastored a church and served in other United Church of Christ positions. And yet, during all this time, I have not been able to stop worrying about the poor in our nation. One of the blessings and challenges of Conference Ministry is that I hear from church pastors about the restrictions that many of their congregations try to put on them concerning “politics in the pulpit.” The notion that Christian preachers should steer clear of politics in their sermons is a particularly unbiblical one. So much of the Bible is focused on concern for the “least of these,” (Matthew 25:40) those experiencing food insecurity, those who have no access to clean water, those strangers – dare I say immigrants – among us hoping for a better, safer life, those with too little cash to properly dress themselves and their children, those who are sick and cannot access affordable healthcare, those imprisoned for crimes small and great and non-existent. These are the folks whom Jesus would have us care for. It’s right there in Matthew, and yet preaching about them can cause some pastors to lose their jobs. Jesus was nothing if not political. Indeed, his preaching about injustice in his day took him to the cross.

Despite the claim by some that we live in a Christian nation, I see scant evidence that our society is overly concerned about those who are living on next to nothing, as authors Kathryn Edin and Luke Shaefer write about so compellingly in their book, $2.00 a Day: Living on Almost Nothing in America (Houghton Mifflin Harcourt, 2015). There was a time when we were a nation led by those who were concerned about the poor. President Lyndon Johnson declared war on poverty. This may have been derailed by the expensive quagmire in Vietnam but at least he was concerned enough about income inequity in America to initiate what he saw as a path to a Great Society. That government is responsible for the welfare of its citizens is biblical as well. In the Genesis story of Joseph, who was sold into slavery in Egypt by his brothers and subsequently became the right hand of Pharaoh, we find the government setting aside grain during the fat years in order to provide for all its citizens during the lean years. (Genesis 41) Today, many of our leaders don’t even pretend concern for those who struggle to eat, who struggle to find a place to live (read Evicted: Poverty and Profit in the American City by Matthew Desmond), who die 10 to 15 years earlier than the rest of the country (read “The Gross Inequality of Death in America” by Roge Karma in New Republic, the May 10, 2019, edition). It is impossible to live on a minimum wage job, yet our government gives huge tax cuts to rich individuals, some of whose wealth ranks higher than 65 of the world’s nations.

Many good Christians are more than willing to stock food pantries and organize diaper drives, yet some of these same congregants complain if their pastor brings up “political” issues regarding policies that make food pantries necessary. Many Christians are very satisfied to recite the Nicene Creed written in the Fourth Century, a creed that relegates the entire ministry of Jesus to a comma. UCC minister Robin Meyers argues: “‘… Born of the Virgin Mary, comma, suffered under Pontius Pilate …’ And there you have it: the entire life of Jesus, all of his teachings, the parables, his interaction with the poor, his healings – whether metaphorical or literal – all reduced to a comma.”1

During the first years after Christ, the first churches of Jesus followers were a collection of people who were unapologetically countercultural. They remembered the example of Jesus and his ministry. They were overwhelmingly made up of people from the servant classes. They welcomed all. We are told in the Acts of the Apostles, that “the whole group of those who believed were of one heart and soul, and no one claimed private ownership of any possessions, but everything they owned was held in common.” (Acts 4:32) We’ve come a long way since then: In the past century our nation has moved farther away from this notion of shared responsibility and caring for one another.

One has to ask, Why? Why has our society moved so far from caring concern for the least, the last, and the lost of our cities and towns? Why have so many Christians today forgotten the teachings of their professed leader, Jesus Christ? That almost seems like a dangerous question to ask, one that invites truth-telling in an era when truth has become hard to find. I would suggest that we have become a nation of idolaters. (There, I’ve said it!) And what is the god that we worship above all other gods? Money, wealth, and celebrity. We have become a nation that celebrates the amassing of great fortunes. We have as a society somehow decided that having uncountable liquid assets confers goodness on those who possess them.

The consequence of such idolatry is to believe the corollary – that the poor must then by definition be bad. We feel free to think of them as lazy, indolent grifters looking to take what we have. Defining poor people this way gives us cover to turn the other way when our leaders openly work to shrink the social safety net down to almost nothing. Society has come to a place where it feels now like America gets to decide what kind of Christians we are. Or will we follow Jesus in feeding the hungry, clothing the naked, giving drink to the thirsty, visiting the imprisoned, healing the sick?

In many congregations, I believe we have gotten far away from the kind of church that the Apostle Paul was planting all over Asia Minor back in the first years after the death and resurrection of Jesus. Those early churches were based on a radical kind of love that had them caring for society’s outcasts and least powerful folk. The churches that Paul planted were full of women – and make no mistake, in firstcentury Israel women were at the bottom of the power heap. The churches that Paul planted were full of servants and slaves, folks whose lives were a struggle for survival. They were attracted to the gospel because of that radical kind of love and caring that each of them had for one another.

As I sit writing this, I am participating in “social distancing,” sheltering-in-place to avoid the COVID-19 pandemic that is holding the world hostage. I am working from home, participating in the effort to lower the curve of infection so that our hospitals will be able to manage. But this notion that we can just work from home is shining a spotlight on the economic disparities in our nation. Salaried employees will work from home and continue to receive a paycheck, week after week as this crisis drags on. Hourly workers often cannot work from home and are being laid off by the thousands. Unable to pay the rent, many may find themselves losing their homes. Their children’s schools are closed and their children are missing not only their lessons, but often their breakfast and lunch as well. People in our nation’s prisons are unable to distance themselves from others, creating an environment where the new coronavirus will be able to strike and possibly kill obscene numbers of them. And our fellow citizens who are living with homelessness have a choice between living out in the cold or living cheek by jowl in a homeless shelter, passing the virus from one person to the next.

The good news is that these grim facts have invaded the consciousness of many good people who are working to find ways to feed the school children, provide rent relief for tenants, put cash in the hands of people who will not survive without it. It has created a fertile ground for Christians to live into the Gospel of Jesus Christ, to answer Jesus’ call to love our neighbors and care for the strangers. This is a time when more and more people are working to make God’s love and justice real. 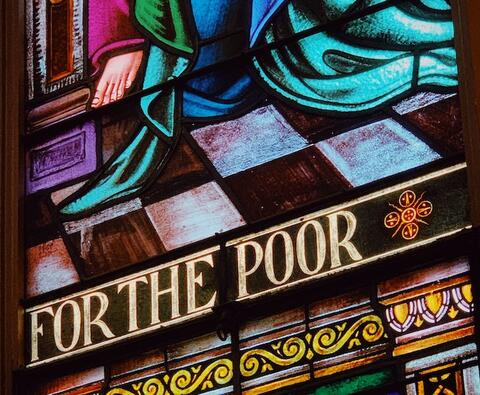