A Group Effort Against Bitter Inequality

Our neighbor Jan has become such a close sister in Christ that she’s joined our family holiday dinners. We see her more than our relatives, and she knows us well enough to check in about our son’s basketball games and our vacation plans. Her chatty, newsy personality and broad smile make this grandmother easy to get to know.

What makes our relationship uneasy for me, though, is Jan’s housing circumstances. She’s one of the 4,000 unhoused persons in Oakland, CA, a number that has risen 47 percent in the past two years. By comparison, the tech industry here has boomed such that 25,000 households in the Bay Area have more than $5 million in investable assets.

My family doesn’t possess that kind of wealth, but we do have an extra bedroom. So you can imagine my guilt when Jan stops by on a cold, rainy night, and, this time, all I do is lend her a few dollars – not nearly enough for a hotel room. She’s been assaulted at night before, and I fear for her safety. As she’s gotten older, she’s become more wan and sickly. Wandering outside all night has made her more incomprehensible, more on edge.

I grapple with how much responsibility I should assume for her.

Because of my church background, which taught me to take Scriptures seriously, and my Asian heritage, through which I was socialized to put family first, I’ve come to prize loyalty to my church family, Jan included.

Yet national discourse about the “undeserving” poor, especially when coupled with the notion of America’s open “land of opportunity,” suggests that I need not be responsible for Jan – she doesn’t merit help.

To what extent am I my brothers’ and sisters’ keeper in our current national condition of staggering inequality?

To address my dissonance and seek a deeper wisdom around these questions, I turned to Jan and two other African-American neighbors from our church – two women in their late 50s and early 60s, Kara and Shauna, who’ve known homelessness in their lives. Their experiences reveal the starkly different America that is often endured by women of color. They expose the unfair, simplistic assumptions that fuel hostility toward those who struggle economically.

The baby of her family, Kara smilingly reminisces about how her dad sat her on his lap daily and asked her to read the newspaper. Already by kindergarten, she recognized quite a few words. Kara continued to do well through middle school, but in high school her boyfriend died and her parents broke up.

In other circumstances, Kara might have been able to cope and graduate. But in Oakland at that time, high schools weren’t institutions of mobility but “dropout factories” where less than 60 percent of the students graduated. Even with her sharp mind, Kara lacked supportive teachers and strong friendships to keep her in school. Along with many of her peers, she dropped out.

With few decent paying jobs available, Kara turned to the only neighborhood occupation paying a living wage – dealing drugs. Although whites have used drugs at the same rates as blacks, the War on Drugs that ramped up in the early 1980s focused on inner cities like Oakland. Not surprisingly then, Kara became one of the African Americans who were six times more likely than whites to be jailed for drugs.

These two roadblocks – pushed out from school and into jail – destined Kara and most of my neighbors to chronic underemployment or unemployment. When Kara’s godmother asked her to leave her home because she needed to raise rents, Kara resorted to living in a tent under a freeway underpass.

When she luckily got into one of the few shelters in our city, Kara took advantage of every resource available. On Wednesdays, she dutifully made the five-mile trip to the shelter’s office to access a free lunch, medical care, therapy, and referrals for housing and work.

Tragically, about four months into her shelter stay, one of her close friends died of an overdose. That shook Kara to the core, and she prayed for deliverance from her own crack addiction. Soon, miraculously, she claimed her “tongue lost its taste for drugs, and instead is only used to praise our Lord!”

Today, despite becoming sober and saving money for a deposit, Kara can’t find anything in Oakland’s hot housing market. Shelter staff push her to find her own apartment, but the search is futile. Her income – a monthly SSI benefit of $900 – isn’t enough. The cheapest rent for a studio in Oakland is $1,400 a month.

Proverbs 20:23 states that “God detests differing weights, and dishonest scales do not please him.” In the same vein, God must abhor America’s racialized stratification that places undue burdens on individuals like Kara, even though she’s turned her life around. As members of this society, are we not complicit in this corporate sin? And should not our repentance be to address our broken system?

In a nation now so hyper-individualistic that we pursue our personal autonomy above everything, we lose sight that every one of us needs uplift from others.

All my unhoused neighbors take personal responsibility for their mistakes and their own actions. Yet those who get out of homelessness do not necessarily credit self-sufficiency as the reason. Instead, they learn to rely more on others and the support networks available to them as they take care of themselves.

I first got to know Shauna when she walked through our church doors one morning, and according to her, “heard the voice of God and never left.” A generous, stately woman who grew up in Oakland, Shauna quickly began to lead our church outreach that offered hot showers to those living in nearby tent encampments.

Ironically, Shauna and her partner became homeless themselves when they got evicted from their hotel. They spent their days scouring for vacant units and their nights riding the bus to stay warm.

After a few weeks on the streets and in a shelter, they finally found a cheap apartment. Shauna described getting out of homelessness as a “group effort.” She got subsidized rent from one agency, counseling from another, and healthcare from a third. One church provided her bus passes and apartment referrals. Her partner made sure she ate well, took her medications, and slept soundly.

Even though Shauna received a rent voucher through a city program, she couldn’t meet the rental stipulation requiring income that is 2.5 times the rent. For a $1,000 unit, she needed $2,500 a month. Only through additional paid work from my congregation, New Hope Covenant Church, and co-signing of the lease by church members, was she able to move in.

God calls us to acknowledge our interdependence, mutual need, and duty to one another. First Corinthians says, “We were all baptized by one Spirit so as to form one body – whether Jews or Gentiles, slave or free” – or housed and unhoused. Since we are one body which needs all its parts, we “should have equal concern for one another. If one part suffers, every part suffers with it …” Shauna and I are both parts of the same body. When she suffers, I suffer too.

Does It Hurt the Poor to “Help the Poor”?

I’m conscious that those on the streets, as well as those in my own home, deride me for helping out Jan with spare cash so often. They say lending to Jan is simply pouring money down a drain. They believe I’m being used and conned.

Twice I’ve loaded up my car and helped Jan move into an apartment. The first time, she yelled giddily to her friends, “I’ve got an address!”, which is a big deal to those on the streets. After having to leave her second home, though, she’s had to couch surf or sleep in cars.

Despite our congregation’s efforts to hold her accountable, she’s often broken boundaries and asks constantly for handouts. Quite a few times, she’s banged my door in the middle of the night – after getting over an iron gate – pleading for bus fare or a McDonald’s meal. Many of Jan’s supporters have cut ties with her because she doesn’t take concrete steps towards self-sufficiency.

Jan admits she sabotages herself by making poor decisions, such as spending half her income to stay in a hotel room for two or three nights. However, even those choices are understandable. “It’s really tiring to be out all night, and sometimes I just want to get some sleep!” she explains. “So I binge and get a room.” When she runs out of money, she has to get handouts on the street in order to pay friends who let her sleep on their sofas.

My fear of “being used” doesn’t compare with Jan’s anger at being routinely vulnerable and ignored. “When the lights are on and I see people in their homes, I am angry,” she laments. “My friends know I’ve got nowhere to go, but they don’t answer my calls. I wonder if I even should exist!”

In Acts, the early church didn’t hold to the capitalist idea of private property. Instead, ”they sold property and possessions to give to anyone who had need.” The Letter of James challenges us, declaring that we don’t have authentic faith if we do nothing about the physical needs of those without clothes or food.

The church that Jesus established radically broke down dividing walls of race, gender, and class. Paul explicitly taught the Corinthians that when we take communion, we are to examine whether we honor this unity, especially in how we share with others.

Jan has finally signed up for a long-term, transitional shelter where Kara resides, and we continue to pray that they can both find permanent, affordable housing. In the meantime, I’m grateful that I have them in my church family to teach me Jesus’ way of hospitality and justice, of radical sharing and faithful love.

As the numbers of those without housing increase, the church has the great opportunity to bear witness to Jesus’ life and work. Like the early church, we can be countercultural in the depth of our compassion for others, and in our radical sharing with others. May we, like Jesus, assume responsibility for our family and become one, so that we are for and with one another.

Russell Jeung, Chair and Professor of Asian American Studies at San Francisco State University, is a community activist, evangelical leader, and author of At Home in Exile: Finding Jesus among My Ancestors and Refugee Neighbors (Zondervan, 2016). He has also worked in China and served in the San Francisco Mayor’s Office. In February at YDS, he led a weekend-intensive course in the Divinity School’s Transformational Leadership program. 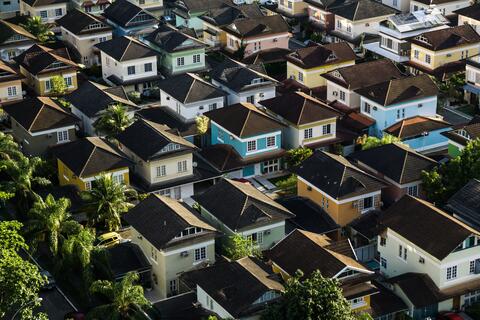