Imagining a Shared Economy: An Interview with Willie Jennings

Willie Jennings is Associate Professor of Systematic Theology and Africana Studies at YDS. His book The Christian Imagination: Theology and the Origins of Race (Yale, 2010) won an American Academy of Religion Award of Excellence and the Grawemeyer Award in Religion. His commentary Acts (Westminster John Knox, 2017) received the Reference Book of the Year Award from The Academy of Parish Clergy in 2018. His upcoming book, After Whiteness: An Education in Belonging (Eerdmans), explores problems of theological education within Western education. A Baptist minister, he is also at work on Unfolding the World: Recasting a Christian Doctrine of Creation and finishing a volume of poetry called The Time of Possession. He spoke to Reflections early this year.

REFLECTIONS: Should Christians “interrupt” the economic discussion and join in?

WILLIE JENNINGS: We’ve allowed ourselves to think that a kind of magic is in control of the economy. This has intensified in the last 50 years. The rise of the discipline of economics in response to the complexities of the modern economy makes all non-specialists look like intruders who have no business asking questions about the values that guide economic decisions. A Christian who might want to speak about systemic problems of finance or fiscal policy becomes reluctant to “interfere” or say anything.

A lot of churches have resources and are trying to do good. That’s a direct response to the call of discipleship, and it should be applauded wherever it’s happening. But a pervasive attitude contradicts that fine work, the attitude that we should leave economic matters to the state. A popular interpretation of Romans 13 has created a strange disconnection. Romans 13:1 says, “Let every person be subject to the governing authorities; for there is no authority except from God, and those authorities that exist have been instituted by God.” That allows the state its authority, but many today extend that authority to the economic realm and to corporations. The result is a moral constipation, a fear of speaking to the political realities of the economy or questioning how it works and who it benefits.

In the West, a number of Christians have benefited mightily from these status quo conditions of economic inequality, and they’ve formed theologies to legitimate it. One example is the rise of the prosperity gospel, in which an investment-dividend principle is applied to God. Give financial resources to God, and God will give it back to you with interest. It’s a painfully fiducial way of imagining our relations with God.

REFLECTIONS: How do congregations begin to envision reforms?

JENNINGS: Imagining alternative systems of exchange – in real estate, in the marketplace – is not an easy thing for congregations to initiate. We lack an exposé sensibility to find out what banks and stockbrokers actually do, how decisions are made, how the incredible power of financial institutions works, how debt is structured and exacted. I’d like churches to ask detailed questions about the World Bank and the International Monetary Fund and all the ways money flows through and around us.

Churches are great at storytelling. One way to start this conversation about the economy is to invite people to speak who are in debt. Hear their stories of how it happened. Hear from neighbors from other countries to learn how debt works there. Study the global history of indebtedness, a history that is tied to colonialism. Invite businesspeople to speak who are guided by their Christian faith. It’s time to apply a serious moral calculus to this issue – how moral considerations are made not only in small businesses but in large corporations. Invite them in and ask how they do this work.

REFLECTIONS: Aren’t we tempted to give up on the vast issue of the economy and conclude, “It is what it is”?

JENNINGS: Economic conditions can be altered. Nothing creaturely or created has to be the way it is. We Christians are called to a shared economy. We can learn to talk about that. The difficulty is we’re all caught up in a sophisticated practice of consumerism and hoarding, and we’ve been conditioned to it for so long that we can’t imagine other possibilities. We’re up against enormous energies of advertisement that are employed every day to convince us of the need of things we don’t need.

But accumulation and hoarding are built out of fear, fed by a terrible anxiety around questions like: Do I have enough? Will I ever have enough? There must be ways to break the power of this fear. The history of colonialism shows how consumerism turned need against itself. That is, merchants learned to intercept the community’s discernment of its own need and reduced need to an individualized pursuit and definition. If a consumer had a wider vision of need, based on the priorities of a whole community, then merchants would have to take that into account. If a community decided what it needed – whether particular foods, medicines, networks of support – then it might decide that market prices are too high on certain goods and particular services are of no use, and the community could exert its power in the market in that way.

But the market wants to keep our habits individuated. We are so fragmented and geographically unaware and adrift that it’s hard even to conceive where we might begin on the ground to think communally about our needs. We could start by imagining a three-mile radius and asking, What do we and our neighbors need together? Surely churches could play a role in getting people together to start thinking together.

Our creative energies are turned in the wrong direction if all our creativity is given over to an individual consumer identity, to the aesthetics of capitalism. Our imaginations can’t be captured by the consumer horizon. We have other creative impulses. They emerge out of a sense of calling, a desire to do good in the world. These things can be aligned with profit, but they can’t be reduced to the logic of the consumption of goods and services only. We need activists and poets and prophets to help us dream beyond consumption dreams.

REFLECTIONS: It’s now spring 2020, and the pandemic is rampaging. How do you make sense of the moment?

JENNINGS: This is part of a tragic stream of viruses that have struck us over the two last decades. The mass production of food and the way animals are handled are contributing factors because of our hyper meat-consumption habits. And we are so connected now. It’s a terrible irony that our connectivity has not yielded a shared ethic of community. We’re suffering from a combination of connectedness and a lack of community or more precisely an ability to sense the suffering of communities in any dense sense of connection.

I’m deeply worried about the number of vulnerable people – immigrants and others – when the virus hits their countries. We have so many people trapped at borders hoping for entry, exposed to the elements, vulnerable to violence, and fighting off despair. We have an economic system that isn’t doing life together. Inevitably we have leaders who will say by their policies, If you die, too bad. But we know that we can’t overcome this virus by imagining you can section off one part of a population, the part that has good health insurance, and let the other suffer. The virus doesn’t care about class or race or borders or policy.

For centuries now we’ve imagined that our lives are played out inside the market as that larger reality that binds us together socially and functionally. But this moment is reminding us that there is a larger reality that the market itself is embedded in: the fragile world of social relations both local and global.

There’s another aspect to this – our attitude toward death. We’re habituated to think that we can live without death keeping us in its sights. But death is always trying to reach into life. It crouches at the door of poverty, illness, and violence. Millions of people elsewhere know the menacing reality of death. They live with illnesses that could be cured, with the social fabric of life being torn to shreds by weapons, and with their countries marred in debt to rich countries, and nothing changing at the hands of inept governments. They understand that death is indeed the enemy. This virus is a reminder that death is waiting there.

For our part, too many Christians haven’t been schooled on how to handle the fear of death so that we are not controlled by that fear. That’s clearly behind the panicked buying of everything from toilet paper to guns, as well as behind our border policies to enhance our sense of security at the cost of others.

The issue is not, Why did God visit this virus on us?, but What is God intending to do in the midst of us and our suffering? We learn from the life of Jesus that God’s first response to suffering is to come be with us, and join us. The great mystery is that we exist at all – we’re creatures created out of nothing. So we are weak and fragile and could be destroyed at a moment’s notice. It’s not sin. It’s our condition, and in Jesus, God joined us in our condition, never forgetting the weakness of our flesh. We must remember that we serve a God who went among lepers. That legacy can’t be denied. In fact, it must shape our thinking as these next several months unfold.

Regardless of what happens over the next few months, social distancing will continue to make sense. But we’ll have to think about the ramifications of that, because the larger ethical arc of our lives cannot be sustained if we seal ourselves off from others. I hope isolationism will not become the new normal for people who already bend toward singularity in how they imagine the good life. 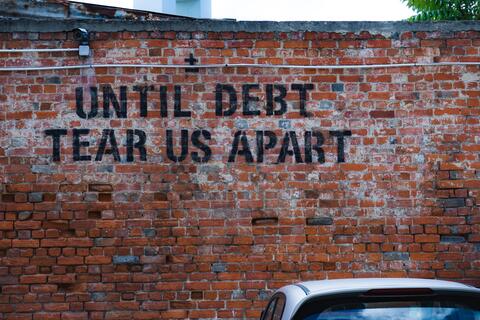