Repairing This “Era of Abandonment”

Fifty-five years after civil rights activists marched across the Edmund Pettus Bridge and awoke the nation to their struggle, the city of Selma is quietly dying along the banks of the Alabama River. Good paying jobs have all but disappeared, whole blocks of houses and roads are in disrepair, healthcare is a luxury because Medicaid expansion has been blocked by the state, and generations of local boys and girls have disappeared into a knotty web of jails and prisons.

Perhaps most stunning, for those who know the hallowed history of this place, is that residents have fewer voting rights today than they did after the passage of the Voting Rights Act of 1965.

Callie Greer is known around Selma for her cooking and her affinity for telling the truth. Mother to five and grandmother to eight, she has lost two children: Mercury to gun violence and Venus to preventable complications due to breast cancer. Venus suffered a hard and slow death, blocked at every turn from receiving what would have been life-saving care because she could not afford health insurance; her breasts rotted while state of the art mammogram machines sat idle and inaccessible. In a city whose neglect has lethal consequences for its residents, Callie has emerged through the unimaginable as a beloved community leader, healer, and voice for change.

All across the US, there are thousands of communities like Selma and countless leaders like Callie who are sounding the alarm of a nation in political, economic, and spiritual crisis. Today, there are 140 million poor and low-income people living in the richest country in the history of the world. Just three men hold more wealth than the bottom half of the country; 43 percent of the population is poor or just one emergency away from poverty. In past centuries, poverty may have been unavoidable, but the same is not true today. At a time when 3D printers can construct entire houses, we have, maybe for the first time in modern history, the technology and the material resources to abolish poverty. We live in what could rightly be called the era of abandonment, in the midst of abundance.

Moral Arc of the Universe

For 40 years, while a wealthy few have advanced a cascade of neoliberal reforms that have flattened wages, heightened inequality, and expanded poverty, a dominant narrative has blamed the poor for their miserable conditions. This ethos is baked so deeply into our institutions – from schools, to houses of worship, workplaces, media, government, and the military – that many of us simply take it as a matter of fact. In this telling of the moral arc of the universe, people are poor at worst because they are lazy and immoral or at best because they don’t have the right job training or role models. The antidote in either case is for the poor to complain less, act better, work harder, and pray more. This narrative is critical for those who would prefer to cast poverty as an aberration in an otherwise healthy society, rather than as structured into the core of our present political and economic order.

It is in these circumstances that poor and impacted organizers, advocates, moral and religious leaders, and many more have come together under the banner of the Poor People’s Campaign: A National Call for Moral Revival. This initiative, of which I am the co-chair alongside the Rev. Dr. William Barber, understands that we are living in a kairos moment – a time of great change and transformation, when the old ways of the world are ending, and new ones are being born. From our study of history, we know that these moments appear sparingly and carry both profound danger and real possibility. We also know that during kairos moments in the past, from Reconstruction to the 1960s, broad fusion movements led by those most impacted have been necessary to protect and advance our most precious moral, religious, and constitutional values. These movements were concerned not just with tinkering around the system or a finite policy change, but with a moral revolution of values that could transform political will and imagination.

When we raise the demands of the Poor People’s Campaign, we are always told to be practical. We are instructed that the nation cannot afford the cost of universal healthcare or living wages and free public education by the same people who subsidize and write blank bail-out checks to Wall Street, the fossil fuel industry, and military contractors. Last year, we released a Moral Budget which demonstrates that if America spent less on war, and if those who can afford to paid even modestly more toward the common good, we could invest in transformative programs of social uplift, end homelessness and poverty, and strengthen our democracy for generations.

As I write this, we are threatened by an unfolding public health crisis caused by the coronavirus. The virus will hurt the poor disproportionately, and then, because poverty acts as a multiplier in a public health emergency, everyone else is put at greater risk. In an emergency such as this, when no person is safe or immune, we must come to see that the cost of not providing for people’s basic needs far outweighs the cost of providing them. Just as we attend to the sick in moments of heightened emergency, so too must we turn our attention to a nation that is soul sick – that is, as Dr. Martin Luther King Jr. said, “approaching spiritual death.”

Last summer, the Poor People’s Campaign presented our Moral Budget before the US House of Representatives Committee on the Budget. The six of us who testified represented a growing fusion movement: Alongside Rev. Barber and me was Kenia Alcocer, an undocumented community organizer from Los Angeles; Chris Overfelt, an Iraq war veteran from Kansas; Savannah Kinsey, a low-wage worker and organizer from central Pennsylvania; and Callie Greer from Selma. Testimony after testimony, we offered a different way forward, with clear demands and a vision for what is possible when the poor and impacted take action together. In response, we heard familiar and tired talking points about poverty from members of Congress. Some spoke about the failure of the War on Poverty as evidence that programs of social uplift don’t work, while ignoring the dramatic attacks that politicians have made to undercut that initiative. Others replied with tales of their own success rising out of economic hardship and argued that it is bootstrap individualism and Christian charity that alleviates poverty.

The walls of the congressional committee echoed with empty words that distort what the Bible says about the poor. For someone less familiar with the arguments of regressive politicians, it might have been surprising to hear so many seek refuge under theological cover. As a biblical scholar and a student of social movement history, I have written extensively on how our religious texts instruct nations to care for the poor and dispossessed. As a long-time organizer, I have learned that with very little else to stand on, those in power desperately seek to distort the liberating power of our religious and faith traditions. If we are to fight back, we must contest the moral terrain of our nation. In this kairos moment, we must build a fusion movement that can break through that which divides us and revive that which gives us all life. Please join us. We need everyone who sees the need to revive our impoverished democracy to join in. All are welcome in the Poor People’s Campaign. Come to Washington, DC, on June 20 for a Mass Poor People’s Assembly and Moral March on Washington.

The Rev. Liz Theoharis is co-chair of the Poor People’s Campaign and director of the Kairos Center for Religions, Rights, and Social Justice at Union Theological Seminary. She is the author of Always with Us?: What Jesus Really Said about the Poor (Eerdmans, 2017) and co-author of Revive Us Again: Vision and Action in Moral Organizing (Beacon, 2018). She is ordained in the Presbyterian Church (U.S.A.). 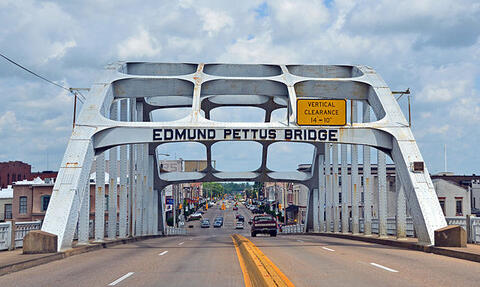