“We Are Called to a Deeper Awareness”

I wake up early in my seventh-floor apartment in Crosstown Concourse in Memphis, lazily pull on my workout clothes, and head down three flights of stairs to the Church Health YMCA. In the stairwell I notice a man wrapped in several layers of worn-out clothes. His possessions, held in reusable bags and an old backpack, are gathered around his feet. He has made one of the many fashionable public seats around Crosstown a makeshift bed. It does not look very comfortable.

An hour later on my way back up, I see the man again, this time gathering his things, preparing to leave to begin his day.

I wonder what his day will be like. For me there will be meetings, calls, laughter with co-workers, the deep joy that comes with the privilege of doing what I am called to do. But for him, I wonder if he, like so many others in the Midtown area where I live, will leave this temporary dwelling and go to a job, only to leave work unsure of where he will sleep. Or as I make my way to Mississippi Boulevard Christian Church, will I see him again standing on the corner of North Claybrook and Jefferson Streets, without work, as with so many others who have found their lives upended by economic hardship, opioids, and what can only be captured by the word “life.”

As I begin my day, and think about the particular vulnerabilities of his, what remains in my mind is the simple truth that things aren’t supposed to be this way.

It makes my work as a Faith and Health Resident, a position made possible by a partnership between Mississippi Boulevard Christian Church and Church Health, that much more meaningful. At the heart of both organizations is a rugged commitment to helping people experience lives that are “filled with more joy, more gratitude, and a deeper connection to God,” in the words of Church Health founder Dr. G. Scott Morris ’79 M.Div.

That is why Church Health, which offers affordable healthcare to working uninsured people, is concerned about the social factors that impact the health of its patients and indeed all residents of Shelby County. At Church Health, poverty matters just as much as high blood pressure, and how you feel about yourself and the world around you matters just as much as your course of treatment.

In the one-mile radius that defines the immediate ministry field for Mississippi Boulevard and Church Health, the social factors that define the lives of those caught in cycles of economic, substance, and social abuse cannot be ignored. Indeed they necessitate a response, whether in the exam room or the sanctuary pews.

A Decisive Day at Church

Every week it happens at church, the Invitation to Christian Discipleship. This particular week, like every other, I stood at the front of the sanctuary along with the rest of the pastoral staff awaiting the individuals who’d decided to make a discipleship commitment. Among them coming down the aisle to customary applause and praise was Angela. She had a soft, kind face, but avoided making eye contact. After being welcomed by Pastor J. Lawrence Turner ’06 M.Div. and his wife, Bridgett, Angela was escorted to the New Disciples suite, where after church the congregation formally receives those who have made a “decision for Christ.” What I encountered there was unlike any other Sunday I’d spent in worship.

Each person was asked, What propelled you to walk down the aisle? And when Angela’s turn came, she said, “I know I need to get right with Jesus. And I decided to start today.” There was silence, and the expected nods of agreement. And then Angela continued, “I sleep outside on the side of the church, I like it there, there’s an outlet I can charge my phone, and no one bothers me, but I just want to make sure you guys won’t call the police on me.”

No one was ready for that admission, not I, not the congregants who week in and week out embrace new members into the body of Christ.

What does it mean to become a Christian and continue to experience homelessness? What does it mean to join the church where you sleep on the steps each night? How do you respond to Angela? I had few words, except to assure her we wouldn’t call the police on her, and I told her that she was loved. I said all the things you’re taught in seminary to say, yet none of them changed the fact that Angela needed somewhere to sleep that night, and for many nights after that.

That’s when the real work of the day began. As service let out, I began to work with the receptionist to call local shelters in the Shelby County area. Surely if they had a bed, we could get Angela there. Except finding a bed for someone on Sunday morning is easier said than done, because many of the local shelters are closed on Sundays. Angela was eventually connected with county social services, and from time to time I see her at my grocery store, and her face is no less kind. More importantly, she now has stability in her life and knows she has people at church who are willing and excited to do life with her.

This experience of trying to minister to and with Angela added a greater depth to the conversation about outreach ministry at The BLVD (as our church is affectionately called), and helped push the congregation to commit to opening The BLVD Cares Center later this year. The BLVD Cares Center will be a central hub where the congregation can further live out its mission to Lead, Learn, Live, and Love without Limits in Memphis, connecting with people who work yet remain food and housing insecure, under- and uninsured, and by all accounts trapped in systems of poverty and brokenness that break the heart of God.

The Web of Mutuality

The ministry of Church Health and the mission of The BLVD Cares Center aim to meet our neighbors’ practical needs. Since arriving in Memphis, I’ve learned there is an intimacy to be shared with those who are abused by the lethal machinations of human systems designed to debilitate. In Memphis one has little choice but to get proximate with others who are hurting: The web of mutuality seems so much stronger here on the banks of the Mississippi. We are called to this deeper awareness.

We are called to meet the demands of kenosis, where we take seriously the call to empty ourselves of our privileges, our desires, our comfort, and become accountable to the will of God for ourselves and for Creation. This is the first step, the step I try to take each day. For I believe that in the kenosis encounter – where the fullness of who we are meets with the boundless possibility that is God’s presence in the world – we find the power, the grace, and the courage to hold stubbornly to hope. A hope that is tied to the Resurrection, which always means reimagining, reordering, and reconciling Creation. This is the work that must endure, beyond soup kitchens and clothes closets. We must not forget that discipleship demands that we be present and awake, that we keep watch as Christ moves in the world, that we partner with God and one another to work and witness.

Joshua Narcisse ’19 M.Div. is the inaugural Faith & Health Resident on staff at Mississippi Boulevard Christian Church and Church Health in Memphis. He is pursuing ordination in the Presbyterian Church (U.S.A.). 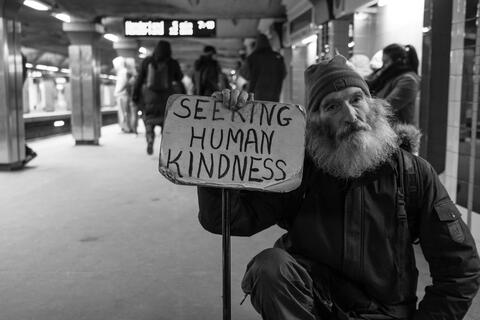