Why Is “Socialism” So Hard to Talk About?

Whatever “socialism” is, the term elicits a visceral response from many in the United States of America. I’m sure people reading this have had conversations where the concept was raised and conversation had to end – the word names the limit beyond which dialogue cannot proceed. Anything tarred with the brush of “socialism” cannot be countenanced.

Laying my cards on the table, I am an advocate for much of what is called “socialism” in America (universal healthcare, universal post-secondary education, strong unions, and – perhaps more radical than the first two – workers owning at least 50 percent of the companies that employ them). I grew up in Britain and came to the US when I was 22, first to teach students from underprivileged backgrounds, then to work in homeless ministries, then to pursue a Ph.D. in theology. I come from a moderate-conservative family, closer to the moderate Harold McMillan vein of conservatism than its Thatcherite iterations.

Even after eight years here, I remain astonished at the extent to which my family would be labeled radical socialists if they were US citizens. And I remain astonished at how hard it is to speak openly about the issues which continually provoke this question, “Is there no alternative to the US’s very specific version of free market capitalism?” This piece is a brief exploration of that difficulty, as well as an attempt to ameliorate it.

So, what is it that makes the muscles clench when the word “socialism” appears? What is it that triggers every negative association, the absolute and unshakeable conviction that “this cannot be allowed to stand”? From my perspective as a relative outsider, a lot of it has to do with how the word works ideologically. “Socialism” and “capitalism” have specific, technical meanings in the history of ideas, but in a US context, they express fundamental values that trigger a chain reaction of emotional associations and reflexes. Thus “capitalism” stands for “America” which stands for “liberty” which stands for “good.” By this logic “socialism” stands for “Stalinism” which stands for “tyranny” which stands for “evil.” It is hard to think clearly about anything whose very meaning seems to threaten “liberty,” the founding ideal of the US. And so when “socialism” rears its head, it isn’t just a political idea among ideas: It immediately summons up specters and ghosts which seem to threaten the very existence of what matters most.

One of the effects of these associative chains is the conflation of various phenomena. That is, though capitalism and socialism can be broadly defined, there is no one thing that counts as “socialism,” no one thing that counts as “capitalism.” And so it is difficult to speak plainly about the true nature of American capitalism – its unusual hostility to regulation combined with its reliance on government intervention, its “mixed economy” conditions. It is also hard to name the fact that there are other capitalisms, including those which live in symbiotic relationship with socialist programs. Instead, there is only “capitalism/freedom” or “socialism/tyranny.”

The second effect is that it is hard – perhaps impossible – to think that the US brand of capitalism might in fact be inimical to liberty. At the level of reflex, the same way that one knows that fire will burn, it is just known and assumed that without this form of capitalism, there is no true liberty. And it cannot be conceded that this form of capitalism might deprive more liberties than it grants. Such a claim simply can’t make sense from inside this thought world. Indeed, the notion of liberty in question here is one whose meaning has been shaped by US capitalism. The idea that there are liberties unknown to this economic system is thus unthinkable.

All of this happens behind the eyes. In the same way that a vast array of nerves and neurons determines how our brains will process stimuli as sight, a complex of grammars and associations determine how we can process words as meaningful, then meanings as truth. The way we see is patterned around them – and so it becomes nearly impossible for what we see to change how we see. The limits are reached.

Irrespective of where one stands on the morality of US capitalism, I hope this account has at least some ring of plausibility. Given that the problems driving many US citizens towards a version of socialism don’t seem to be going away, I likewise hope it seems right to say that these things must at least be talked about. It is not enough to just repeat the same foundational assertions – to respond to the idea of universal healthcare with the claim that it is antithetical to liberty. All this does is assert a position within a situation under siege; it does nothing to address the situation. We must, then, have the conversations which we cannot at present have. We must speak about what we can’t speak about. And how are we to do this?

It is here that faith comes into the picture. First, most monotheistic faiths believe that God absolutely transcends creation, precisely as God is intimately close to all creatures. That is, God can be close to us precisely because no creaturely thing is God. One consequence of this, however, is that no creaturely thing can be like God in certain ways. In particular, God alone is good.

Religion can easily be used to entrench ideological associations. It can also be used, however, to break them up. And one way of doing so is to include in one’s prayer life a reflection on the fact that if God alone is good, then no creaturely thing can be good in the way that God is. That associative chain “capitalism/liberty/America/good” has to be broken up – not necessarily in an absolute sense, but certainly in the sense in which it is absolute. One’s faith in a God above all can thus be a way of questioning and stilling one’s reflexive loyalty to what is not God. (This argument is derived entirely from theologian Kathryn Tanner of YDS, especially her books God and Creation and The Politics of God.)

This is a prayer practice based on doctrine. The second possibility is more grounded in the ethics of faith. Almost every urban community has a population suffering homelessness. Contrary to popular legend, more members of that population will have been made homeless by medical debt than poor life choices. (For example, I worked with someone who was made homeless by bills for cancer treatment. Her cancer returned after several years on the streets.) Whatever one’s political ideology, the love of God drives creatures to seek each other out in times of distress. There should be ways of serving with those in distress, whether in day shelters or soup kitchens or stronger healthcare protections as the pandemic has underscored. Driven by God to do this, just listen. In many cases, you will be hearing the stories of US capitalism’s victims, not its victors. And whatever the solution to this situation might be, there is nothing like this listening to throw an article of political faith into question.

This is certainly what shook my world, making me realize how much I hadn’t seen. It is, after all, by looking into another’s eyes that our ways of seeing are so often changed. Though this would be at best a beginning – a new possibility of hearing the question, not an answer – different kinds of beginning need to take root in America. We cannot simply repeat the same patterns, driven by the same forces, mistaking our taught convictions for God’s word and failing to see Christ before us.

Ed Watson ’18 M.A.R., originally from Scotland, is working on a Ph.D. in theology at Yale, focusing on the relationships between theology, colonialism, and ideology. 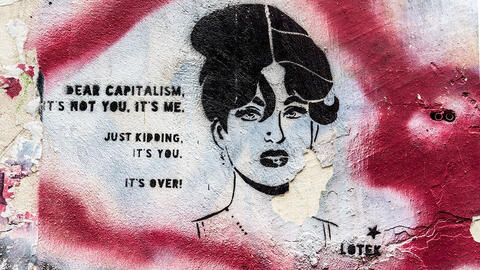