“Anger is the Engine of Hope Now”

The following remarks by panelist Willie Jennings, Associate Professor of Systematic Theology and Africana Studies at YDS, are adapted and edited from an online panel discussion in June 2020 called “From Words to Work: Dismantling Racism,” presented by Yale Divinity School. The entire video can be seen here.

Like so many others, when I watched the killing of George Floyd something broke in me. It was yet another moment in which the privilege of violence, tied to police, tied to white men in uniform, came home. It’s the arrogance and sense of privilege that comes with this violence that heightens the rage so many people feel. I think anger and rage are not only appropriate but necessary at this moment.

The struggle has always been how to handle anger, how to manage it. But I am encouraging everybody to be angry right now, and find a way to see the anger as a shared project that binds us to God’s righteous indignation. The challenge is not to let anger move into hatred. That’s always the difficult thing – to be angry but not to hate. When anger becomes hate, then we open ourselves up to violence. One of the practices found inside Christianity, especially in the Christianity of most African Americans, is the discipline whereby we live with anger, but we fight against hatred, and we shun as best we can violence.

Nothing that is has to be the way it is. That fundamental impermanence, that instability, is an opportunity to create change.

Hatred and violence have been part of the common currency in this country from the very beginning. And we understand that violence is a part of the currency of the way things function even now. The challenge is: how do we walk away from that currency and its power? My worry is that many people right now are being driven not by a divinely righteous indignation but by fear. They want to do something constructive because they’re afraid of what might happen in their communities if they don’t – or they’re afraid of being seen as racist if they don’t. Those two points of motivation are not going to sustain us. We have to have anger that ties directly to hope. Anger is the engine of hope now.

The root question we face is the stubbornness of racism and the impenetrability of white ignorance. This is what’s so frustrating to so many 20-somethings and 30-somethings – people’s stubborn refusal to recognize the irrationality of their “reasoned” arguments for why we are where we are. At this point I don’t think there’s anything we can do to convince the young generation of activists that things are going to get better unless they see concrete change. And I completely agree with them. At this point it’s not about increased education of police or adjusting other policies. A fundamental change is necessary.

Young people are impatient about what is clearly an ongoing energy, a power that sustains the status quo. Even now we are in the midst of certain practices and structural realities that go right back to slavery. We know that. And young activists are wise to see those connections. So much structural violence is built right into the way neighborhoods are shaped. People see it and feel it whenever they grow up in a community of food deserts, hospital deserts, or an inadequate educational system. They understand this is not by chance. It takes incredible energy and imagination to shape these communities in these ways. These energies constantly press forward the white supremacy of this country.

Where is God in This?

But the question “Where is God?” can be translated into another question: Where is God’s power right now, and why isn’t it being used? The difficulty for Christians, especially in this country, is that we don’t have the theological sensibility to know how even to think about divine power because we exist inside worldly power. To live in this country is already to live inside a profoundly distorted vision of God. To function as a Christian inside that distorted vision of power makes it very difficult to talk about God’s power. Because if we were theologically attuned, then we would recognize that God’s power has nothing to do with our life in this country. There’s another power driving that, and it’s captured by the words demonic power.

How can we be followers of the God we worship in this crucial moment? The Christianity of America has been a Christianity deeply at home with the violence of America. So if we wonder what God’s presence would look like right now, I think what God would be doing is casting the demon out of us. That would be the reality of divine power for us – God exorcising out of us the demonic.

My hope is we’re in a moment where we can almost immediately begin to dismantle the resistance to seeing the truth. Focus on the stubborn resistance to seeing, learning, and accepting. For the first time in history, maybe we can get people of European descent who’ve been here hundreds of years to abandon practices that constitute a cultivated ignorance – an “I don’t know, I don’t want to know, and if I do know I’m going to deny that I know” – and move into a deep moment of decision to learn and live and act as though you know.

That’s going to be crucial, because these efforts will always be thwarted by an abiding practice of ignorance, escape, concealment, and segregation: whiteness continues to be a cultivated practice for so many people. We are at the cusp of an opportunity, especially for young people who are saying, “I don’t want to play the game of pretending not to know and living my life in the comfort of not knowing.”

We need to enter fully into local projects of changing the way things are. As theologians we understand the world was created out of nothing. In Christian thought that means the world has no inherent permanence. Nothing that is has to be the way it is. That fundamental impermanence, that instability, is an opportunity to create change. Nothing has to be the way it is, nothing has to stay the way it is. To believe that something other than God is permanent is already idolatry.

Willie Jennings is Associate Professor of Systematic Theology and Africana Studies at YDS. His latest book is After Whiteness: An Education in Belonging (Eerdmans, 2020). 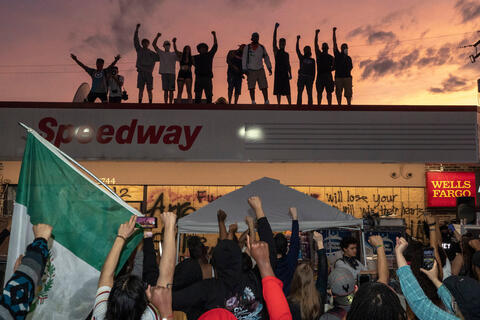 Protest at the scene of the killing of George Floyd by Minneapolis police, June 2, 2020.