This sermon was first delivered at the Bethany Theological Seminary Preaching Series on Race in September 2019 in Richmond, IN. The following version has been shortened and adapted for Reflections. Quotations attributed to Harriet Tubman (ca. 1820-1913) are italicized and placed in bold.

Around this time of year, in late September 1849,

The woman we now know as Harriet Tubman

Set off into the dark

On her first trek towards freedom.

She left at night. Towards an unseen land and an unknowable future.

And like so many other fugitives whose names are unknown to us but cherished by God,

About what it means to live by faith.

In the Episcopal Church, Harriet shares a feast day in July with Sojourner Truth,

But I wish today were her feast day. I wish pilgrims commemorated

Maryland’s Eastern Shore, up through the Delmarva Peninsula, and over into Philadelphia,

Harriet brush by on her first escape.

But, American vanity being what it is, I worry that such a pilgrimage would

Harriet Tubman as a woman who was

Fearless, invincible, and self-assured in the American sense of these terms.

Yet she was none of those things.

She was not fearless in the narrow sense.

Too much had happened to her and to the people she loved.

And she was not invincible.

Because she had the “deep scars on her spirit” [1]

That came from being hated, as well as a physical disability –

Stemming from being hit in the head with a two-pound counter weight.

This confidence was rooted more in God than in herself.

She spoke of asking of Him or consulting Him

In a casual, intimate way,

The way you and I might talk to one another.

Despite not having the money.

And when asked how she’d pay she said,

I’m gonna talk about it with Jesus tonight.

One of her Quaker friends, Thomas Garrett said,

“I never met anyone

who had more confidence

in the voice of God.”

Harriet Tubman was one of those people who packed the achievements of 20 lives into one. Risking her own life, she made more than a dozen trips on the Underground Railroad and liberated more than 70 people – actually close to 1,000 if we count the additional 750-plus people she liberated at the Combahee River (near Charleston, SC) during the Civil War. Eventually she became known as the “Moses” for bringing so many out of “Egypt.” But on this night in September, she was more like Abraham who set out into the unseen and found God there.

Set out that late September evening,

She was not seeking to become anyone’s hero.

She couldn’t have known what even the next hour would hold.

But lack of control did not mean lack of clarity:

I had reasoned this out in my mind, she said.

There was one of two things I had a right to,

If I could not have one,

I would have the other.

She left at night.

Without the ability to read road signs.

Without expertise in mid-Atlantic geography.

On the clear nights

She had the moon and the North Star.

And when it was cloudy,

She could trust the mossy side of trees to guide her

Or squat down next to a stream and feel the current.

She thought they all flowed South,

And she was mostly right –

Right in her belief that

Nature could be trusted.

Her best ally was the darkness.

Under that blanket she could walk

Not racing, because she needed her stamina.

And not standing still because she had to

But carefully, because there was a whole

Life world around her

That she could not see …

Delicate insects wisping by on nightly errands of their own …

And slavecatchers stalking the night for Black flesh.

She’d had dreams about these.

Before she learned to listen to God in nature, she

Listened for God in dreams.

First, there were the dreams of a woman screaming.

Maybe it was her own screaming,

Or her Mother’s or her two older Sisters who were sold South.

Her Mother never stopped mourning for them.

God could’ve been screaming in her dreams at what was happening to them.

We don’t know if the screaming dreams intensified during

Those times that John Broadus (the slaveowner) considered selling members

All we know is that the

And that it announced

Then there were the

These she says little about

Beyond the sense of threat.

It makes sense that she’d feel

Hunted by a force she could not see.

Horror was and remains part of Black experience in the Americas.

Most mysterious were the

Years before she tried to escape

Of flying over fields and towns,

And rivers and mountains,

Looking down upon them

And reaching at last

A great fence or sometimes a river

which she would try to fly over.

And just as I was

There would be ladies

All dressed in white over there.

And they would put out

And pull me across.

She’d make it, but not in

She’d have to be carried.

The ladies dressed in white

Who put out their arms and pull

Lived by faith in a hostile land,

Those whom our scripture says

“Died in faith without having received the promises,

But from a distance they saw and greeted them.

God is not ashamed to be called their God;

Though dead, the saints are very much alive

Through these flying dreams, they give Harriet the confidence to

Step out by faith.

Harriet was one of those Christians who believed in direct revelation.

She was not embarrassed to talk about dreams or visions

Or signs from another shore.

Her God was God of the temporal and the eternal;

Able to hold the things we understand

And the things we will never understand.

God was the only one who was utterly trustworthy in the dark.

To walk for hours in the dark,

Is to be drawn not only out of place

But out of time,

And to be swallowed in the

Enormity that is God.

A Buddhist teacher I know

Says we find the strength

To face the thing we cannot face

When we can imagine

Something large enough to hold it.

Harriet finds that “Something Larger” in God.

Moving out into the dark meant

Moving into the hidden will of God

Where there is no grid

Just the ocean of divine un-knowing

And Hebrews suggests every saint

In the dark it becomes clear that

Only God is God.

Preoccupation with assured outcomes into a way of being that is

Shouldn’t our practice of Christianity give us that?

I don’t know if you’ve ever found yourself outside

Walking alone in the dark

And heard the wind rustle the leaves …

Or looked up into a black sky

There’s a quiet beauty and a touch of fear

When you tap into the fact that we are all finite.

And finitude, as my friend Sue Dunlap says,

We have emotional limits

Limited power to predict the future

Painfully limited power to protect those we love.

In the daylight these ever-present limits

Recede into the background

But in the dark …

They are thrown into full view.

The illusions of control are pierced.[2]

And pressures us to spend

Trying to look like we are in control and

Pretend we have the answers.

And the performance of that fiction

Does violence to the soul.

When there’s a rush to resolution

And a refusal to go deep.

This is a problem because one of the areas race operates is in the realm of memory.

Some of the most important work of excavation happens

When submerged memories thaw and flood into consciousness

And there’s enough trust in the room to share that memory.

When this happens, what we need is to

Wobble and sway in the new depth of what’s been shared.

But sometimes the desire to be in control

Clamps down the energy

And there’s a rush to move on, talk about something else …

What we need is to

Develop sea legs so that we can

And more uncertainty without shutting down.

Or, what we need is to move like Saint Harriet

And find God there.

Shepherd keeping the sheep in control,

But as the Dark Mystery who envelops us;

As the Endless Depth,

As the Inner Music,

That’s who God was for Harriet.

What if God is using Harriet to expand our understandings of divine presence?

Because that’s what it’ll take to live by faith.

One of the church’s failures when it comes to race

Is its unwillingness to go into the dark.

The church is content with learning good racial etiquette

Rather than pressing forward and

Dismantling systems in ways that will

Have been infected by white supremacy.

I mean, the idol of control has corrupted the

But I often do.

Because “reconciliation” so often means

And leaves people of color with the burden of

Pretending the past doesn’t inform our present-day interactions

As much as it does.

Reconciliation has been reduced to just one more

A tool to manage the unmanageable.

And the continued emphasis on reconciliation

Keeps the church from moving out into the dark

Where something newer and freer can happen,

Where a divine vision can emerge.

The church’s language around hope suffers, too.

I see this when white Christians

Look at the wreckage of American racism and

Prevail on people of color to give them hope

Yet often, what’s desired is not hope but anesthesia.

The sun has to set on hope-as-optimism before

What if today, around this 170th anniversary of Harriet’s first venture into the dark,

What we are to be reminded of is that faith is not an abstract concept.

People making the most of impossible situations.

Abraham setting off to an unseen land;

Noah building an ark for a flood he couldn’t imagine;

Enoch being taken who knows where;

Sarah conceiving past her time.

Faith is clearing a path through thick brush.

Such feats give us a window into who Jesus is and,

More, they summon the best from those of us who seek to live by faith.

And what more can I say? For time will not let me tell you about

How God soothed Harriet’s heartbreak when her first husband remarried;

Or how God helped her rig a box, a board, and a mule together into a horse and buggy to

Or how God gave her an apple orchard to provide jobs for family and friends;

To get her veterans benefits and

How she couldn’t pay her bills but survived.

Her life story is a lesson in how to move in cold, dark spaces; how to hold on to your

How to climb softly and deliberately despite your fear; how to clear new territory and

Enter it – claiming the fullness of the freedom God bestows on us.

For the gift of Harriet Tubman and

For her witness of living by faith and moving into the darkness,

Let us thank the Lord. Amen.

Donyelle C. McCray is Assistant Professor of Homiletics at YDS. She is the author of The Censored Pulpit: Julian of Norwich as Preacher (Fortress Academic, 2019).

[1] Howard Thurman, The Luminous Darkness: A Personal Interpretation of the Anatomy of Segregation and the Ground of Hope (Harper & Row, 1965), p. x. 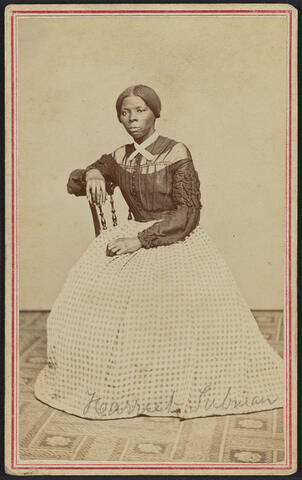