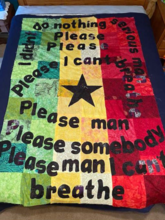 Mona texted me. She was looking for donations of fabric to make a Black Lives Matter banner for our church. I thought: others are going to want to get in on this. My church has no lack of avid quilters. This made me think of the AIDS quilt. I thought: there are plenty of church folks who want to be allies but can’t imagine how to start. What if we collaborated on a quilt? And then I thought: this could catch on other in congregations as well! Later that same day George Floyd’s dying words appeared in the body of an email I received from a group promoting police reform. In George Floyd’s desperation, I recognized the narrative frame I needed. The reckoning we all need.

I began to see my role as a kind of curator of symbolic resonance. I kept expecting someone to tell me I was crazy. Nobody did.

I made my pitch to trusted mentors, and then to my parishioners: The Sacred Ally Quilt Project, a collaboration of UCC churches across the New Hampshire conference, quilting the last words of George Floyd.

This is our role, I said. Of all our social institutions, the church is best positioned to harness and to proclaim the subversive, the ironic, and ultimately the redemptive power of symbol. For millennia we’ve wrestled with the burden of the cross – the Roman Empire’s electric chair – sweating under its violent spectacle and confronting its distillation of all pain, humility, and sacrifice. And so, when we collaborate on a project with symbolic depth we are actively living into “God is still speaking.” “God,” I say, “is still sewing.” I began to see my role, as a minister, as a kind of curator of symbolic resonance. I kept expecting someone to tell me I was crazy. Nobody did. The Sacred Ally Quilt Project came together quickly.

The plague summer slouched ever on. A group of quilters from nine churches began meeting on Zoom.  Volunteers from my church, in Jaffrey, cut out words for the quilt. I tackled my word on a Saturday afternoon, measuring the letters, sketching the word on paper, transferring the outline to the back of a piece of fabric and, finally, cutting it out with great care. It took me about three hours. My word was “claustrophobic.” Three hours is a long time to spend with this frightening word. In 2020, “claustrophobic” feels transformed, made synonymous with George Floyd’s trauma. Fear of small places. Fear of confinement. Fear that we may never be free of this suffocating racial hatred. Fear that, left to our own depravity, we may never be redeemed.

Quilt nine has three words: “I can’t breathe.” Harriet Ward, who is from the Pilgrim UCC in Brentwood-Kingston, claimed them. Or they claimed her. “I saw my ancestors caught up in nets and kidnapped, choking on tears and gasping for breath,” she wrote to me later. “I saw the hold of their prison ship, no light, no air. The stench of human waste, sickness, death, suicide … They could not breathe! I saw my cousin trussed up in ropes and dragged through the streets. We had a rule in my childhood: don’t move don’t breathe when you see a white person. Wait for permission to do anything. George Floyd’s last words are not a current event.”

As the summer deepened and the 10 quilts started to emerge in three dimensions our meetings in Zoomland got deeper, more exciting, more fraught. Artists involved in a common craft, we fell into a banter of celebrating each other’s prowess – the subtle nuance of symbol, the satisfaction that attends aesthetic flourish. But doing so, we became aware of a painful irony. There we were, a crew of mostly white folks feeling good about ourselves, while the actual words we were bent over quietly implicated us. George Floyd’s pain won’t go away. We respect it, walk gingerly around it as one would walk around a grave. We honor his pain with this stitching, this prayer of thread. And yet, always, we suspect that we don’t fully get it, these words, this sidewalk paroxysm of American brutality. The weight of 400 years of racial hatred coalescing on a kneecap. This, then, is the narrative of our quilts. Allyship is not easy. This is our encounter with beauty and pain.

The Rev. Mark Koyama ’15 M.Div. is minister of The United Church of Jaffrey in Jaffrey, NH., and teaches English and religious studies at Northfield Mount Hermon school. 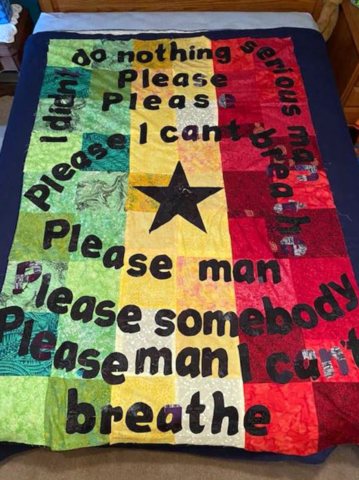