Gestures of the Soul

“My work has always had a deeper quest behind it. I have traveled on foot from Munich to Paris because Lotte Eisner, my mentor, was critically ill, and I did not want her to die. I did not want to allow her to depart. I have traveled around Germany, always following the border. I wanted to hold the country together. It was before the reunification, at a time when many Germans were vehemently against it.”

When interviewer David Marchese countered that some might think Herzog “crazy” for believing that “walking can prevent somebody else’s death and unify Germany,” Herzog had this to say:

“They are gestures of the soul, and they give meaning to my existence. … I said only the poets, our common culture, will hold us together, and I have to do this.”

A three-week physical and metaphysical trek from Munich to Paris to prevent the death of a friend … A border-tracing über-ambulation “to hold a country together” … When I read Herzog’s words about gestures of the soul, I thought of the Hebrew prophets. When I read this summer of the Black Lives Matter marches in Louisville and Minneapolis – indeed in scores of cities from Manhattan to the town of Petal outside Hattiesburg, a virtual molehill of Mississippi – I was again drawn to Isaiah, Jeremiah, Ezekiel, and Hosea, not their spoken oracles but the enacted parables: their prophetic walkabouts, body performances, their object lessons with objects such as leather scrolls, clay pots, and wooden yokes.

Ezekiel schlepped his personal effects on his back twice a day through Babylon – in imitation of the next wave of deportees from Jerusalem, 500 miles west – and erected doomsday signpost messaging on the outskirts of town.

In the year when Sargon, king of Assyria, sent a commander to Ashdod to battle and conquer it, the word of the LORD came through the hand of Isaiah ben Amoz, saying, “Start walking. And untie the kilt around your waist and strip the sandals from your feet.” And that’s what he did: he walked around naked and barefoot. (Isa 20:1-2)

According to Isa 20:3-4, Isaiah witnessed to facts on the ground for three years, one step at a time, that predicted entire populations undergoing exile in humiliation and utter poverty; whether these were daily, weekly, or seasonal constitutionals we cannot know.

A century later, Jeremiah, sometimes with a cohort of fellow travelers, staged protests in Jerusalem, Babylon, and Egypt. Jeremiah strutted around in a ratty undergarment to illustrate Judah’s deteriorated intimacy with God (Jer 13:1-11). He shattered a pot before an audience of big shots to symbolize the precarity of privilege (Jer 19:1-13) and paraded through Jerusalem shouldering an ox yoke during an international political summit both to portend and expose the impotent servility of the powers-that-be. While still in Jerusalem, Jeremiah enlisted via letter his Merry Pranksters in Babylon to read a scroll he sent them, tie it to a stone, and then toss it into the Euphrates where it, like Babylon itself, would rise no more.

The accounts of some of Ezekiel’s soul gestures, set in Babylon during the Exile, are interspersed between his vision reports of the divine chariot orbiting Jerusalem (Ezekiel 1-11), so it is easy to be skeptical that the overelaborate mise en scène in Ezek 4:1-5:17 (etch a map of Jerusalem on a brick, place an iron griddle between it and your face as you lie on your left side for 390 days, then reverse position and lie on your right side for 40 days, then bake a flatbread over a fire of human – no, make that cow – dung, then shave your head and … ) was ever staged. But Ezekiel (Ezek 3:1-3) might very well have eaten a leather scroll. (Werner Herzog once ate his shoe in a documentary film because of a lost bet to fellow filmmaker Errol Morris.) Ezekiel schlepped his personal effects on his back twice a day through Babylon – in imitation of the next wave of deportees from Jerusalem, 500 miles west (Ezek 12:1-7) – and erected doomsday signpost messaging on the outskirts of Babylon (Ezek 11:18-23).

Far be it from me to recommend any of these specific methods to contemporary disciples of the Hebrew prophets. Still, the inspired mischief of this historic season’s protestors – and the dangers they ‘ve faced – under the banner of mishpat or justice, can be seen as part of a tradition of “good trouble,” in the late John Lewis’s phrase. The Biblical Hebrew abstract noun “hope,” tiqvah, builds on the word for “thread,” qav. Hope is that fragile cord that we hold onto and that holds us. Blest be the tie that binds contemporary nonviolent protestors to the biblical prophets.

Gregory Mobley is Visiting Professor of Interpretation of the Hebrew Bible in Congregational Settings at Andover Newton Seminary at Yale Divinity School. His books include The Return of the Chaos Monsters – and Other Backstories of the Bible (Eerdmans, 2012). 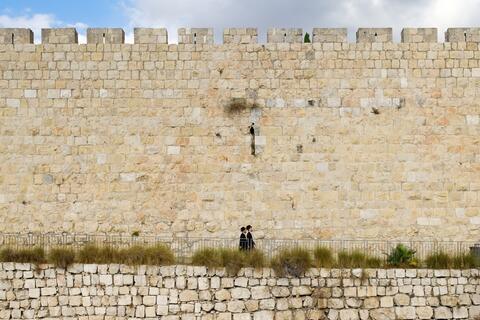