Hope for This World

When the philosopher Immanuel Kant asked what were the main questions of philosophy, his answer was “What can we know?”, “What should we do?”, “What is a human being?”, and “What can we hope for?” This last question caused him difficulty. He was clear about what we should hope for in our lives as a whole, including the next life: we should hope that God will bring the union of virtue and happiness. Kant was here translating the vision from Psalm 85 that righteousness and peace (shalom) will embrace.

But his difficulty was with what we should hope for in this life. He said apparently contradictory things about this, and he never found a completely satisfactory solution. This is because the Christianity that he was trying to put into philosophical language has itself historically been divided on the issue. Hope in human progress towards the good waxes and wanes. In the same way, if we trace the philosophers after Kant, from Hegel to Heidegger, and through the end of the 20th century, we will find a waxing and waning of hope that humanity is progressing morally towards a world of peace and justice. At the end of the 20th century, as at the end of the 19th century, and as at the end of the 18th century, there was a surge of this hope.

Thus Francis Fukuyama in 1992 wrote The End of History and the Last Man (Free Press), proclaiming the final triumph of liberal democracy. A century before, in 1896, William James could say in “The Will to Believe” that we all agree about the moral progress of humanity. At the end of the 18th century, Kant was tremendously hopeful about the reaction in Europe to the ideals of the French Revolution, for example in “The End of All Things,” published in 1794. But then he had to face up to the horrors of what the French Revolution actually produced. The optimism of William James had to face up to the horrors of the First World War. In our own time, it is interesting to compare what my Yale colleague Seyla Benhabib wrote before the Great Recession of 2008 about “a cosmopolitanism to come” with her observation of the rebirth of an exclusionary nationalism that has followed.

Kant did find a partial resolution of the difficulty, and it was through an appeal to the working of God’s providence. Even if we accept that we have an innate radical evil that prefers our own happiness to our duty, and even if we do not believe that we have the human resources to overcome this evil, we can still believe that our sovereign God can work out the divine purposes despite our constant failures. Kant was worried about false hopes produced by an overestimate of human capacity, and he was right to worry. In the 20th century tyrannical regimes from Stalin to Pol Pot based their policies on the belief that they could achieve moral progress in their peoples by imposing institutional change. Self-help books are full of the idea that we can pull ourselves up by our own bootstraps. Kant believed, in contrast, that we humans could achieve a union of states that do not use war as an instrument of policy against each other even if we remained “devils,” but only because of the workings of divine providence in the arena of human politics. We have to have this hope, he said, in order to sustain our work towards the objective of a just and peaceful world.

Even if we accept that we have an innate radical evil that prefers our own happiness to our duty, we can still believe that God can work out the divine purposes despite our constant failures.

A personal analogy might be useful. People with cancer and their families have to sustain hope if they are going to have a good chance of fighting the disease effectively. This is well documented in the medical literature. But at the same time they have to be realistic about what the disease is doing in the body. This balance is very difficult in practice. Too much realism, and we sink into despair. Too much optimism, and we lose touch with the daily discipline that therapy requires.

A Kind of Cancer

We are now living through the growing awareness that our society has a kind of cancer. I am an immigrant, and a citizen of the US only since 1981. So I write tentatively. I think we are seeing the symptoms of the disease in recent examples of police brutality, and in the disproportionate impact of Covid-19 on communities of color; but the moral disease has been there long before. To fight the disease of systemic racism we have to have hope, not just for the next life but for this one. But we also have to be realistic about the evil in our human hearts. I think Kant was right about radical evil, and he was putting into philosophical language a long tradition he inherited from Luther and Augustine. We seem to be born with a lust for power over other people (an animus dominandi). But Kant preserved his hope nonetheless, because he believed that God is active in human history to bring about good despite our continual failures. We can believe that we can do good and do better, because God cares for those who are oppressed, and God is finally in control. When we work for justice, we are working on the side of the sovereign of this earth who has already defeated the powers of evil.

I will end with Romans 5:5 (NIV), “And hope does not disappoint us, because God’s love has been poured into our hearts through the Holy Spirit that has been given to us.” I want to focus on the “because,” being myself a philosopher with an ear for the structure of an argument. Hope does not disappoint because we are given love. What is the connection? I think it goes something like this. Love is seeing and willing the good. When I love a person with Christian love I see God’s image in her and I aim at the flourishing of her relationship with God. But since I can say, “God is the sovereign of this earth and of the world to come” (and I say this through faith), I can also hope that the good, in the end, will prevail. Hope is thus both a discipline and a gift. It is a discipline because it has to persevere through the daily encounter with evil and suffering, both individual and social. But it is a gift because it comes along with the gifts of love and of faith that are poured into our hearts through the Holy Spirit.

John E. Hare is Noah Porter Professor of Philosophical Theology. His books include God and Morality: A Philosophical History (Blackwell, 2007) and Why Bother Being Good? (InterVarsity Press, 2002). 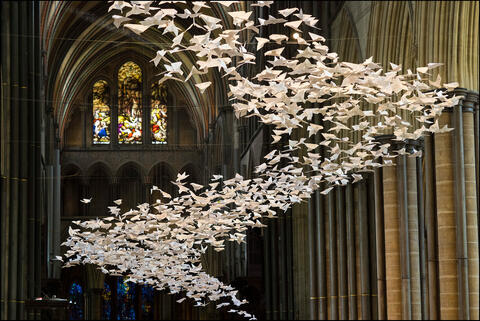 Installation of 2,500 origami doves in Salisbury Cathedral, England, in 2018 by artist Michael Pendry, celebrating themes of peace, freedom, and sustainability