On the Other Side of the Unknown

Now hope that is seen is not hope. For who hopes for what is seen?  But if we hope for what we do not see, we wait for it with patience. – Romans 8:22

One evening, in Paris for the first time, aged 20, I wandered the Left Bank with no directions but those given by the pavements. I came by a low stone wall on my right, beyond which lay the night’s dark. City lights revealed nothing there – not trees, not paths or people. No sound. An earthen smell unlike any I knew rose on cool drafts. Confronting this void, my thought pressed for an understanding, but no memory or usefulness afforded it any frame. I met nothing.

It’s rare to encounter nothing. Mostly, we relate new things to things we already know. It’s a bit like knitting. Into what’s already woven in thought comes a new thought like a darting needle and yarn. What’s new is learned when stitched into what’s known. Learning is usually of that kind.

But encountering nothing presents a different kind of learning. The mind is reminded of its small ambit and great ignorance, certainly, but the pearl of great price is learning that one can stand in the face of the unknown, and be not crushed.

Hope for what we do not see is learning of this kind.

As the word is commonly used, hope orients to the future, but what it longs for there are things already seen and familiar. Hope is the spark that jumps the gap between desire and success. Such hope is natural to every animal with an eye. A dog chasing a Frisbee has hope for what it sees. Human imagination, however, stretches the frame of what is seen into prodigious hopes for what may come. We hope the train arrives on time so the interview goes right. We hope our works matter. We hope the baby comes on time, with ten fingers and toes. We hope the afflicted may rise and that cruel powers be brought down from their thrones. Though many hopes most dearly held remain unrealized, still, they have been seen in promises of parents or prophets, even politicians. Hopes we deem small we call wishes and hopes beyond our powers, prayers. But every hope with a name is drawn from the treasury of thought. They are often beautiful and often necessary, but never are they new. They are “hope that is seen.” They are not the hope the Apostle hopes the church may learn.

When a person is up against nothing and does not ignore it or dismiss it, something new may appear. In that Paris evening, I stood a long while in the not-knowing. To encounter hope not seen, a long while is needed. I thought the dark-only must be a thing unusual, for no city absolves big blank spaces from being worked. The presence of nothing has a like quality. If you stand in it, shorn of the sure sense that things will turn your way, something unusual stands with you.

The pearl of great price is learning that one can stand in the face of the unknown, and be not crushed.

At that low wall that night, I sensed that what I stood before, being unlike every thing I knew, must come from a time I could not have known – an ancient thing. Insignificant as was this young American’s first encounter with a Roman ruin, the path of his inquiry into not-knowing parallels how hope not seen teaches. When ordinary hopes fail altogether, the sense that you stand in a vastly superseding presence, which you cannot have known, can reveal a flame inextinguishable. Call it “hope absolute,” for it has no object.

A few years after my Paris experience, I was staying a night out of town. I did not then think myself a Christian, but felt familiar with church and Bible, and taking the one from the night stand, I read:  “ … no eye has seen, nor ear heard, nor human heart conceived what God has prepared for those who love him.” (1 Cor 2:9)

“I did not know they thought this,” I uttered without breath – “they” being Christians. Paul’s wall of negations affirming the absolute good of God put me at a wall beyond which lay light only. I learned that I did not know the Christian thing at all. That those used-up, barren words – love, God – can fly free of doctrines and qualities. That no mind grasps what lies in light alone, where no eye sees and no heart conceives.

A decade after these things, I began the work of a pastor, holding the fabric of the tradition now in this light, now in that, serving needs both personal and public, both spiritual and just. These works of the church spring almost all from hopes that are seen, for we are in this world. But sometimes, hopes most precious are lost and despair descends and a soul comes to nothing.

Often, that person will not stand in nothing’s terrible presence, but will force a door – into cruelty, into addictions or denial, into self-loathing or suicide or neurosis or narcissism or hypocrisy or nationalism or hatred. Evil thoughts and behaviors are arrayed in us like Mrs. Marcos’ 1,000 pairs of shoes, and for the same reason. Bereaved of what we believed necessary to well-being, we are tempted to jump the wall of despair into uproar and avoid meeting nothing.

A guide along the path to what lies in light alone, where no eye has seen nor human heart conceived, can be of help to one who stands where the last hope foundered. This help is not of this world. The word of the Apostle – hope seen is not hope– can be shown trustworthy as it ushers out and abandons each thought of what ought to have been. Facing the void, one can come into the presence of hope not seen.

How deep this bell is struck. Abram parched at Haran. Jacob on the stone pillow. All the women from Sarah to Mary who were judged unable to bear the future. Elijah in the cave, Elisha with the widow and one jar of oil only. Job in pestilent privation. Jesus 40 days unfed, Jesus on the cross forsaken. Saul’s sight gone, Peter’s old religion overcome by creatures unclean. Some hold that all these always knew God would come, but that is not the story. Don’t damp this bell and rush off from the encounter with nothing, lest hope for what we do not see seem a desert mirage.

A Bridge in Selma

Hope for what we do not see is needed now, as tyranny lopes over the land mangling ordinary hopes and humans. Was our American experiment – to see all people created equal, and to decide whether this nation, or any nation so conceived and so dedicated, can long endure – an ordinary hope? If it was, it will close as soon as too many hopes dashed make too many too weary to work it. Will it close? The answer hangs with those who have met with nothing and did not flee, but stood like John Lewis on that bridge in Selma. If his hope and others’ lay alone in what they could see, the clubs and horsemen dealing death would have dashed them to pieces, and freedom with them.

But we heard Lewis say that even before they cracked his skull that day, even as he stood, he knew he was not afraid. Hope absolute arose, hope for what we do not see, whose flame cannot fail, whose freedom cannot be shackled. Whoever are graced for hope not seen know their blessing, their being, depends on nothing earth can give. These are the warriors and theirs are the weapons for the battle before us.

The Rev. Stephen H. Phelps ’73 B.A., ’86 M.Div., ordained in the Presbyterian Church (USA), served as interim senior minister of Riverside Church in New York City from 2011-2014. He speaks and writes on issues of power, politics, and the future of the church. 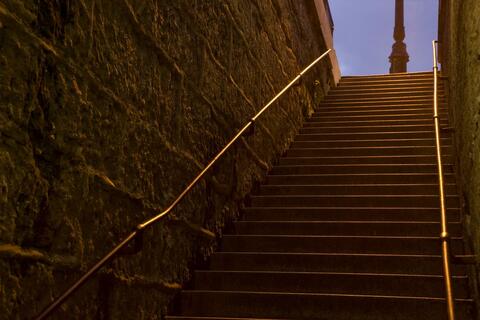