Our Love and Dignity are Not for Sale

“It seems everything is against hope. But for me at least, where I see there has been great love, I see hope being born again.” – theologian Jon Sobrino

Jesus asks a prophetic question in Luke 18:8 that makes me think about what we have been going through lately: “But when the Son of Man comes, will he find on this earth anyone with faith?” This is from a parable about the persistent widow who wants justice, and the uncaring judge who finally relents. Jesus posed the question to his disciples. But it confronts us too, every day, when injustice is a constant traumatic theme. Yet we must persist, like the widow in the parable and like Sobrino the liberation theologian.

Being a Baptist minister of a Hispanic congregation has taught me about the diversity we find in Latin American and the Caribbean countries/territories. Each country has its own unique history, its own circumstances, potential, and causes of suffering. El Salvador remains a wounded nation because of a legacy of civil wars and violence in recent decades. In the case of Puerto Rico, the island’s history has been marked by the colonial impositions of two empires for centuries, first Spain, then the United States.

I had the privilege to go to El Salvador in March 2019 as part of a course offered at Andover Newton Seminary at Yale Divinity School. Learning about Salvadoran history made me realize two things: how rampant injustice can be in a place and yet how powerfully the people still have hope in the midst of it.

The best part of the journey for me was meeting people and seeing their hope up close. A vivid personal example was my visit to a home where a family of four lived. At first glance, their house looked run down and seemed to lack structural value. I wondered, “How can human beings live in these conditions?” Then we were told that the house was actually considered to be in good shape for that neighborhood. One of the family members – a kid with a beautiful smile and much excitement – gave an English Bible to one of my fellow students. He said in Spanish, “I have this Bible but everything is in English. I do not know English and I want to give it to you.” I understood at that moment that hope is rooted in gratitude, even when circumstances have treated people unfairly. Hope does not come from formidable and luxurious physical structures, but from people’s hearts. A combination of gratitude and love can be turned into action. True hope is a grateful heart seeking justice in the form of love.

Puerto Rico, my homeland, is enduring its own historic difficulties – particularly since 2017 when Hurricane María rampaged across the island without hesitation. Afterward, most of Puerto Rico’s households could not count on water or electricity for half a year or more. Many people lost their homes and some are still living under dreadful conditions. In the aftermath, the corruption within Puerto Rico’s government drove people into the streets in July 2019, clamoring for justice and successfully pressing Governor Ricardo Rosselló to resign. As Puerto Ricans got tired of living as subordinates to governments, their hope of seeing their island liberated from injustices made them a voice of hope to other countries. Many Puerto Rican religious leaders joined this movement. Then, in early 2020, Puerto Ricans experienced a number of earthquakes, most notably the destructive quake on Jan. 7 in the southern region, and its aftershocks. I describe these hardships without even mentioning the effects of the Covid-19 pandemic that has hit the island and crippled the entire world.

Many of us remember the painful news reports after Hurricane María – President Trump visiting Puerto Rico and throwing paper towels to the crowd, which was seen as offensive to the Puerto Ricans’ dignity. It has recently come to light that this businessman president considered “selling” the territory of Puerto Rico after the María devastation. It is uncertain whether such a transaction is technically possible. In any case, the Puerto Rican’s hope, love, gratitude, and dignity are not for sale.

At the time of the island’s political protests in summer 2019, people united like never before, carrying the clear message that they refused to give up. I recall a particular banner: Nos quitaron tanto que hasta nos quitaron el miedo (“They took away so much that they even took away our fear”). True hope never tires of visualizing a better future for the people. As the popular song Boricua en la luna (“Puerto Rican on the Moon”) asserts, based on the poem by Juan Antonio Corretjer: “I was born from these tears like a beast in the falling rain and lived with the deferred hope to get back what was lost.” As Leon Gieco declares in his famous song Solo le pido a Dios: “I only ask of God that I am not indifferent to the pain. That the dry death won’t find me empty and alone, without having done what’s sufficient.”

True hope does not come from those who trust in the powerful. I can never imagine Jesus trusting in the Roman empire to bring the kingdom of God.

Indeed, it is through the Gospels’ narratives about Jesus that we are taught that true hope comes from the marginalized and the vulnerable. When I think about Jesus’ prophetic question, I think about that Salvadoran youngster and my people of Puerto Rico. 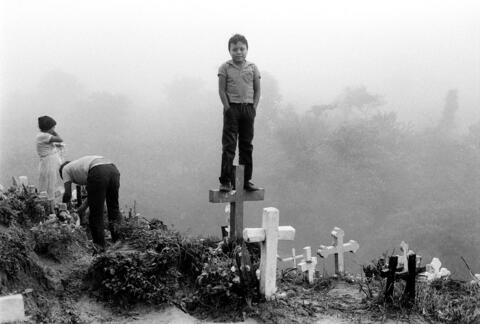