Resurrection in a Plague Year

In 2018 my boss, the Catholic chaplain at Yale, the Rev. Bob Beloin, was diagnosed with a brain tumor. A week later, my dad was also diagnosed with a brain tumor. That year was awful. I took on extra responsibilities at work, while slowly grieving Father Bob as he became weaker and eventually succumbed to cancer. At the same time, I lived with the veiled happiness that my dad’s tumor, though serious, was operable and non-cancerous.

Sitting in the waiting room during his operation, I had every hope that he would be fine as the surgeons removed a golf-ball sized tumor out of the back of his head – and every dread that something would go wrong and he would not only lose his eyesight but his life. After the procedure went well, there was the ongoing hope with every monthly appointment that he would receive good news and his MRI would be clear, mingled with fear that the news could just as easily be bad.

I am a Dominican Sister of Blauvelt. Our community, fairly small and based in New York, was founded to care for immigrant orphans. Our sisters are now mostly elderly, but some still work in education, social services, health care, and pastoral ministries. I joined the community in 2011 full of hope and yet well aware that the average age was above the normal age of retirement, even as our sisters continue to work into their late 70s and early 80s. The same year that Fr. Bob and my dad were diagnosed, 12 sisters in my community died – three within one month – and then a 13th passed away just after Christmas. I wear the Claddagh ring of that 13th sister – lucky or unlucky, this traditional Irish image of friendship and loyalty is a reminder of her and the sisters who came, and went, before her. Somehow, I feel like that year was a personal preparation for what we’re experiencing now.

These last months have been a constant letting go of plans, experiences, gatherings, and routines. Hours before I was supposed to board an airplane with a group of students for an immersion experience in Guatemala, we cancelled the trip.

Holy Week and Triduum, the most spectacular part of the liturgical year for Catholics, was slowly stripped away.

Would we be able to celebrate in person as a congregation? No.

Would we be able to at least have all the Catholic chaplains and a few cantors there? No.

Five people at each liturgy, max: the presider, the lector, the cantor, the accompanist, and the videographer.

No washing of feet, that tangible reminder of our call to service.

No veneration of a cross, at a time when we all had extra crosses to carry, even if that burden just meant sometimes the boredom of home isolation.

No lighting of the Paschal fire during the Easter Vigil, the tradition of watching the Paschal candle and individual candles slowly illuminate a darkened church and provide hope for a people who desperately need it.

No baptisms. No confirmations. No Easter celebrations.

Resurrection seemed deeply hidden within the darkness of the pandemic.

Several years ago, I was introduced to Charles Péguy’s epic poem, The Portal of the Mystery of Hope (1911). I’ve never read through the text in one sitting, but I flip through it periodically to read his meditations on scripture and the virtues. About halfway through, Péguy (1873-1914) talks about Jesus’ crown of thorns, then writes of an alternate crown of supple budding branches, the crown of hope, he calls it. The crown of thorns marks the end. The branches have no use beyond pain and anguish, leading to death. The crown of hope still has life in it, hidden deep within, which can be coaxed out if tended carefully.

It is well known in our community that Fr. Bob loved to fill the chapel with forsythia for Easter. It replaced the crown of thorns that adorned the altar during Lent, symbolically transitioning from death to life. The glorious bright yellow blossoms would shoot up from the base of the altar to the feet of the crucifix, echoing the glow of the release of the Holy Spirit at the tip of Jesus‘ fingers.

… The forsythia’s golden shimmer that stood in for the glow of our candlelight, a sign that resurrection does still happen every year no matter what.

… The text I got from my dad that he is now two years tumor-free and only needs to make the three-hour drive to see his specialist every three months now.

… The Claddagh ring I wear, a small symbol that no longer brings tears but instead a soft smile of remembrance of people once here and now gone to God.

Crowns of Hope in Wooster Square

This year, the cherry blossoms in New Haven’s Wooster Square, where I live, were perfectly timed with Easter. The forced stay-at-home and slowdown realigned my attention to the natural world. Each day, I would join others in the neighborhood to watch the budding blossoms. From the time tight buds would appear, then reveal hints of color, then open their flowers to an umbrella of pink and white, the signs of hope in those trees were a balm during a frightening and devastating time.

Was everything hopeful? No. News continued to announce the horrible numbers of people who had died, the terror of front-line workers, and conflicting information that produced more anxiety than direction. But those blossoms, the crowns of hope, were still present.

This is the thing about hope – it isn’t always in focus, but it is always in the picture. Hope is what allowed Mary Magdalene to encounter Jesus Risen, even in the time of freshly mourning his death. Hope is what allows me to continue to keep faith with a religious community that has more funerals than jubilees or entrance ceremonies. Hope is that first candle lit at the Easter Vigil, even if, because of the virus this year, it is the Paschal candle only, rather than 350 individual candles in a worshiping congregation. Hope means we are starting to see things differently in our world as a result of the pandemic, placing communal values and the dignity of all lives above personal interests and profit. Hope is the realization that even though we will get it wrong many, many times, there is another chance. Hope is little and real and unfolds slowly, just when we need it. 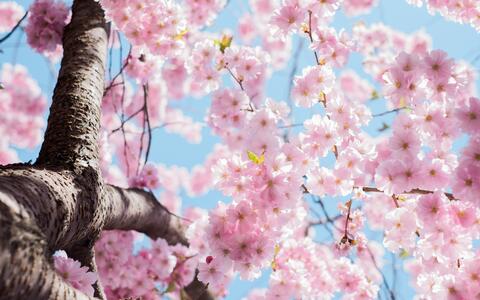