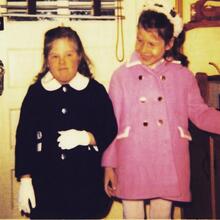 When my sister turned 50, my mother hired some family friends to put together a clambake at her house in Rhode Island for Chris, with lobster, corn on the cob, and potatoes. My only job was to make the cake. We were also celebrating the fact that Chris, born with Down syndrome, had dramatically outlived a pediatricians’ estimate when she was three that she’d only survive to age 18.

We celebrated my 50th a year later in my town’s historic 1880s spiritualist hall, now a theater. It’s a gorgeous building, beautifully painted, elegantly decrepit in spots, with scenic backdrops from the early 1900s still on the stage.

I now find more spiritual comfort from a dream I once had after my father died, where I received the secret of the universe. The secret was: God is the experience of knowing nothing else is required—I want to say ultimate acceptance—not a person, place, or thing.

For many years I’d lobbied for a family variety show on a holiday or at someone else’s big event, but no one complied. Now they had no choice but to grant my birthday wish, and it was spectacular. For about an hour, friends and family read poems, sang old standards, or made up silly songs of their own. For the finale I performed my favorite, “Hey Jude.” All the partygoers joined in: “take a sad song, and make it better.”

But the celebration’s best act happened first, when my sister and our cousin Carole kicked off the show with the Barry Manilow song “I Can’t Smile Without You.” (You can view it here.) Chris and I used to sing it when we were kids, so I thought it’d be easy for her to remember. Carole had worked out some festive choreography, but my sister ended up mostly doing the Nixon-I am-not-a-crook peace sign with both hands. And once she got into it, after a nervous start, Chris improvised with backup lines like, “Get it, grandpa!” and “I’m doing fine!”

At so many events over the years, whenever there was a microphone available, my sister wanted to talk, make a toast, or sing, and she was rarely allowed to. It wasn’t because we didn’t want to let her have it for a bit—it was that we knew she’d never give it back. This time she’d received explicit instructions to sing the one song and then gracefully exit the stage. And this time that’s exactly what she did, with the added move of coming over to give me a hug. For once, our mother was not intervening to manage Chris or our interaction. It was just the two of us sibs, and it felt like our years of competition were finally over. She’d won and I’d won. Both.

OK, so that’s the Hallmark version. The part I left out was I’d asked my cousin DeDe to make a birthday throne for me, and she did, but once my sister was done with her number, my throne became Chris’s, like she’d earned it as an award for performing. Every time I got up, for even a second, my sister stole my throne. I kept kicking her off, and Chris hovered behind it like a bridge troll at the ready to pounce and take it over again. Eventually, I just gave up and made her sit on my lap so we could share it.

There’s an out-of-focus picture of the two of us on the throne. We’re half-smiling and watching the show. I have my distance glasses on, and she’s in a familiar pose of stretching her arm across her chest and making a soft fist over her heart. Coming behind the throne there’s a circle of small white lights behind our heads. A nimbus. I learned this word in divinity school, and its two very different definitions resonate with my understanding of us: a large, gray rain cloud, and a halo surrounding a saint or Jesus.

Chris isn’t Jesus, though she’s claimed to be, and neither am I. We’re just human, not special—well, not “extra” special, and not especially good. For years I struggled with the sense that I needed to measure up to some external standard of being good enough, whether it came from the Catholic Church, romantic comedies, my own disapproving parents, or my early concepts of God.

I now find more spiritual comfort from a dream I once had after my father died, where I received the secret of the universe. The secret was: God is the experience of knowing nothing else is required—I want to say ultimate acceptance—not a person, place, or thing. Just that essence. And we, as humans, can never comprehend that because we’re constantly striving and wanting. We want to be better, and we strive to do so. And those of us who can’t live up to that actually “sin” more against God by thinking we’re not good enough. The trick is not to strive to be better, which presumes one is flawed, but to accept that God already loves you as you are.

A few years earlier, my New Testament teacher showed a rudimentary drawing of a fish, the ichthys, which early Christians used as a secret symbol. When a Christian met a stranger on a dirt road, she explained, one of them drew an arc in the sand. If the stranger drew the other arc, each knew they were in good company. My sister drew her arc the moment we met, and it took me fifty years to finally draw mine.

Dianne Bilyak ‘06 M.A.R. (see diannebilyak.com) is a Connecticut-based writer, poet, and disability rights advocate. This piece is adapted from her recent memoir, Nothing Special: The Mostly True, Sometimes Funny Tales of Two Sisters (Wesleyan University Press, 2021), with permission from Wesleyan University Press. Her interview with her sister Chris can be viewed here. 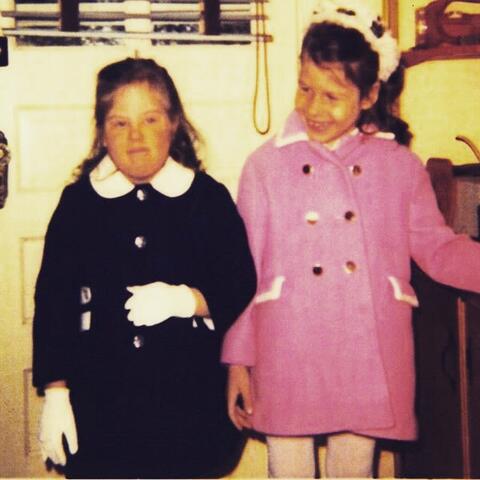