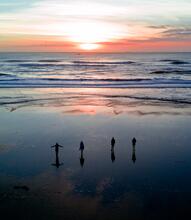 As a new semester opens, the optimism of a return to “normality” has paled with the realization that Covid has by no means left us, and that our immediate futures remain determined by a virus about which not enough is known. The losses have been incalculable: millions across the world have died, leaving many more millions to grieve. Hospitals are overwhelmed with the appearance of the Delta variant, and many of us who are vaccinated are filled with uncertainty about our level of protection.

Stand, or sit, with us. Don’t try to fix us, but share your life and invite us to share ours.

At every stage, Covid has exposed divisions within societies, families, churches, and institutions of higher learning. Attitudes towards the virus cannot be uncoupled from a panoply of issues in our communities regarding politics, race, gender, and social issues. Frequent invocations have been made of a “wartime spirit” bringing us together, but the truth seems far harsher. Covid has divided us in ways similar to the great plagues of the medieval and early modern worlds. A shared threat by a hostile, invisible force about which we know too little and are unable to predict brings to mind a distant age when death in popular imagination and art became the figure of the Grim Reaper with his scythe quickly and unexpectedly taking men, women, and children in the midst of life. Like the medieval communities who blamed Jews for the plague, our society too looks for scapegoats. The Italian poet Boccaccio spoke of people breakfasting with their family and supping with their ancestors.

In common with earlier ages, we are reminded daily of the fragility of life, of the porous boundaries between this world and the next. Each one of us has unexpectedly lost a loved one or lived in fear as they struggle to breath in an ICU. At one time we thought it was our elderly population most at risk, but now we know that our children are not safe. We are bewildered by expert advice that struggles to guide us in the face of a shape-shifting threat. Trust breaks down, cynicism grows as we weary of restrictions and separation from community, whether in a church, classroom, or a family home.

These realities are well known: they have shaped our lives for almost two years. Yet, if we ask what we have learned, the mirror mists. In the world of mental health, the news is far from reassuring. It’s actually terrifying. Covid has brought heightened rates of suicide, separation from help for those suffering most with illnesses of the mind, and increased domestic violence. Once more, racial disparities within our society are exposed in a brutal light through differing levels of access to health care.

As a person with mental illness and extensive health care, I have been able to meet with my psychiatrist and therapist weekly on FaceTime. One of my medications costs almost $2,000 a month, but I pay $45 at Yale Health. When I accidently mislaid my prescription, Yale Health was going to charge the full price to replace it—happily it was found. Unusually, I have the good fortune that my psychiatrist and therapist are the same person, which rarely happens in a world where people struggle to find either. I have a professional who knows my story both personally and medically. I occupy a position of enormous privilege. I have tried to be open about my life with bipolar disorder and have received loving support from family, friends, and colleagues. When I was in hospital, I, unlike many others, received visitors. When I was discharged, I went home to my wife and daughter while many were sent back to shelters or, worse, onto the streets until they could be re-admitted into the system yet again for a week or so.

Privilege, however, extends only so far. Anyone with chronic bipolar disorder or schizophrenia, whether wealthy or not, whether Asian, African American, or white, lives in a valley of shadows. Like the Grim Reaper of medieval imagination, mental illness is no respecter of status or other gifts. The hierarchies and divisions that we have created in our societies offer no protection against the terrors of a disordered mind. But these stratifications do enable some to receive help in ways denied others. Mental health, therefore, is part of a society that enables discrimination and racial inequality. Our society determines who will receive much-needed help, and who does not.

Discrimination has many faces. In addition to questions of financial resources and access to care, it lies at the heart of our world view. Everyone who lives with mental illness is fully aware of stigma, an invidious attitude that has as many manifestations as the people who suffer. Stigma is everywhere. Most prominently, when there is another hideous school shooting, we are told it is not guns that are to blame, but the mentally unstable people who use them. The impression is given, as it was frequently by the former president and other legislators, that the mentally ill are a danger to our society. Be careful of your children! When I was first admitted to a psychiatric hospital, I was told that I could kiss goodbye to any chance for life insurance. Insurance companies point to the statistics that the mentally ill tend to die younger. In New Haven, for example, those with mental illness are routinely rejected by landlords, exacerbating homelessness.

The explicit forms of stigma are well known to the mentally unwell, but an implicit one can be even more painful. It’s the look of pity. It is in the faces of family, friends, and colleagues and arises out of concern and love. Pity is perhaps the most troubling of so-called Christian virtues. At its best it extends to empathy, a genuine sense of connectedness, a putting of yourself into the life of another not by colonizing them, but meeting them in spirit. At its worse, it creates a hierarchy of emotions with its suggestion that it is a tragedy that you are not normal, not like us. Mentally ill people are not looking to be fixed or cheered up. They look to be met where they are, not to be restored to normality through suggestions of getting more exercise or encouragement to eat more broccoli. We don’t want to hear about what you read on the internet or about some supposed wonder drug that you just heard about. It’s like those uniquely American commercials that tell you to ask your doctor about a drug. As if helping a pharmaceutical company’s profits is good for our health. In America, the fixation with solving problems is one of the worst parts of living on the emotional and intellectual fringes. It conjures Leo Tolstoy’s description of Ivan Ilych, that “he has to live like this on the edge of destruction, alone, with nobody at all to understand or pity him.” Pity only underscores his wretchedness; it suggests that we have failed to save ourselves or that we will never enjoy the benefits of life available to others.

Invisible stigma is found in our language, or the absence of it. Break an ankle (I have) and you get visitors, cards, and a meal. Everyone opens doors and helps you down the stairs. That is great and much appreciated. But as my friend Kathryn Greene-McCreight once wrote in a brilliant article, there are no casseroles for the schizophrenic. Nobody knows what to say. Faith communities are no exception. Our churches, synagogues, and mosques are filled with the company of the depressed and the anxious seeking help, but often finding only silence. For many Christians, it makes no sense for a faithful person to be depressed in the face of the good news of the Gospel. Surely, depression is just another form of sin. Yet, for many who struggle, our holy books sound foreign and our God quiet. There is compassion, even pity, but no vocabulary. As with death in our secular western culture, nobody has a clue what to say. They tell you they are sending prayers, as if they were a gift basket delivered by UPS. Whether in faith communities, classrooms, or in the home, we are deeply uncomfortable with saying anything, often out of fear of offending or because the subject is considered taboo or too intrusive. The mentally ill know perfectly well how this broken dynamic works and often say something to make others feel better, to trivialize or to make a joke to put others at ease. My own approach is to be funny, but my wife does not find my defensive maneuvers amusing.

What have we learned from Covid? I am a historian, so more at ease with people who died 500 years ago. Historians are generally lousy prophets, almost as bad as economists. Through my own experiences and years of working with NAMI (National Alliance on Mental Illness), what I do know is that the pandemic has put unbearable burdens on those who struggle with disordered or troubled minds. It has laid bare the inequalities of our society and all too often led to a choice to end the struggle.

As someone who has received a lot of love and support, and who has seen firsthand the amazing work of professionals, therapists, and volunteers in the field of mental health, I offer not a prediction but hope. Don’t pity us. We seek compassion, empathy, and acceptance that ends stigma. Treat us as friends, family, and colleagues, not potential high-school killers or victims trapped in a mental hell. Stand, or sit, with us. Don’t try to fix us, but share your life and invite us to share ours. Speak the words that are the reality of the mentally ill: anxiety, sleeplessness, anger, paranoia, etc. What we endure is as real as the broken ankle, so name it and listen to what we have to say, or let’s just share bonding silence. It’s what a friend of mine calls a ministry of presence.

The brutal realities of Covid will leave all of us scarred in different ways, but it also shines light on ministries of presence, support, and love. Love gives those who see and feel this life differently hope of connection and embrace. Just leave the pity at home.

Canada-born Bruce Gordon, Titus Street Professor of Ecclesiastical History at YDS, came to Yale in 2008 from St. Andrews in Scotland, where he was professor of modern history and received his Ph.D. With a research focus on the late-medieval and early modern periods of European religious cultures, he is the author of a new book, God’s Armed Prophet, Huldrych Zwingli (Yale, 2021), as well as John Calvin’s Institutes of the Christian Religion (Princeton 2016), Calvin (Yale, 2009), and others. He is currently writing The Bible: A Global History for Basic Books. 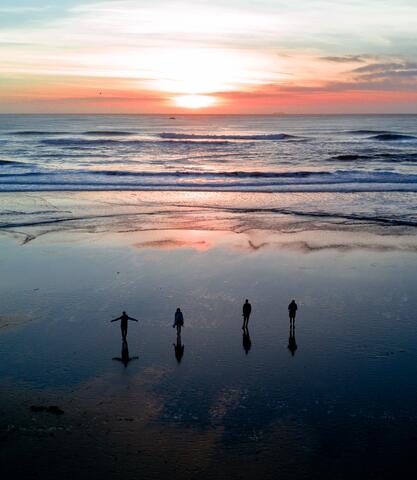